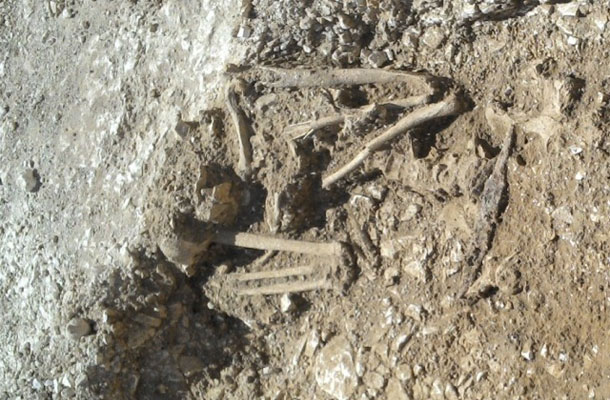 Six Saxon skeletons dating back over a thousand years and Bronze Age round barrows have been discovered in Amesbury.

Mansell is building 14 affordable homes on the site of a disused dairy for landowner Aster Group. The discovery was made during site preparations.

The remains are thought to be those of adolescent to mature males and females. Five skeletons were arrayed around a small circular ditch, with the grave of a sixth skeleton in the centre. Two lots of beads, a shale bracelet and other grave goods were also found, which suggest the findings are Pagan.

The site is now being excavated for other artefacts by Wessex Archaeology, led by Phil Harding, known for his work on Channel 4’s Time Team television programme, while colleagues back at the unit’s laboratory examine the remains and jewellery, which have already been removed.

Mansell site manager Brian Whitchurch-Bennett said: “When we’re working in an area of historical importance we always undertake archaeological investigations to make sure that our construction works don’t damage hidden remains or artefacts. The findings within this particular site really are a one off, we’ve been amazed by the number of discoveries and the level of preservation. It’s certainly a project to remember.”

Aster’s regional development director, Anna Kear, said: “We’re working with everyone involved to ensure Phil and his team can investigate this exciting find while the build continues.”

Mr Harding said: “Given that the Stonehenge area is a well-known prehistoric burial site, it was always very likely some interesting discoveries would be made here. The fact that these round barrows were previously unknown makes this particularly exciting.

“Finding the skeletons also helps us to get a clearer picture of the history of this area. To my knowledge these are the first Pagan Saxon burials to be excavated scientifically in Amesbury. “

The archaeologists are expected to be on site for six weeks in total.