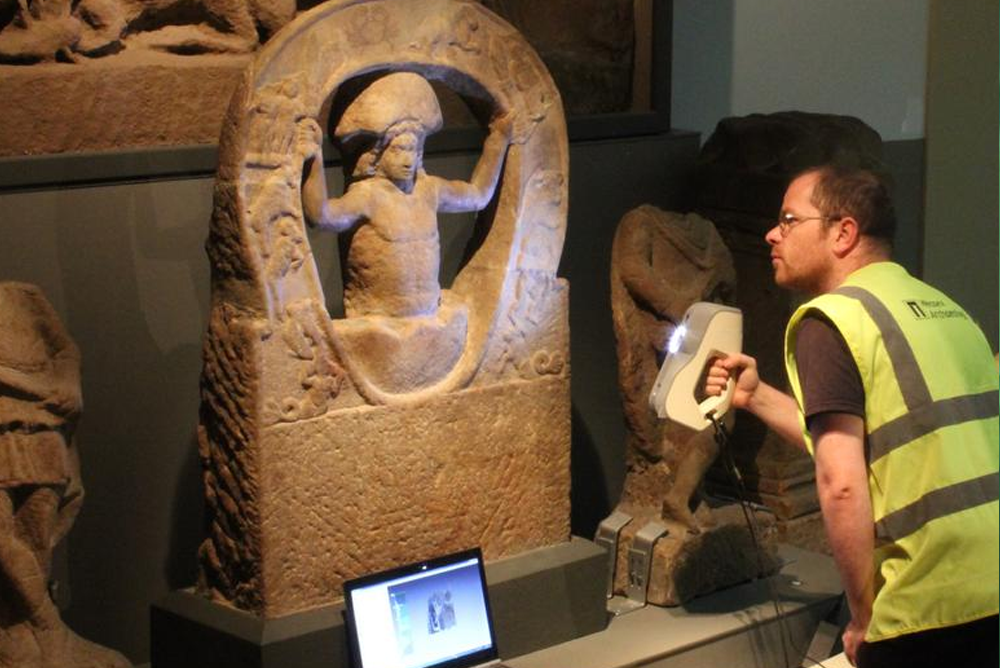 Share on Facebook
Tweet on Twitter
Wessex Archaeology will be posting an example each week showcasing laser scans of Roman monuments from Hadrian’s Wall.
They recently scanned over 60 of these for the University of Newcastle as part the NU Digital Heritage project (http://www.nu-digitalheritage.com/). One of the planned uses of these digital models will be for use as a teaching resource for initiatives such as their free Massive Online Open Course Hadrians Wall: Life on the Roman Frontier.
We will be putting some of the most interesting scans on our blog to help promote this amazing archaeological resource over the next few months. These scans were undertaken recently by John McCarthy, Project Manager in our Scottish office, over the course of seven days in the Great North Museum and other locations. He used an Artec Eva, a high-resolution handheld laser scanner ideally suited to the low light and restricted space around the monument display areas. If you would like more information on Wessex Archaeology’s laser scanning and 3D capabilities you can contact John McCarthy.
The first monument to feature is Tineius Longus – Altar to Antenociticus ( http://www.wessexarch.co.uk/blogs/news/2014/12/02/laser-scans-GNM-no-1 to see the scan)

The University of Newcastle provided the following text, explaining what is known about this monument.
The altar is dedicated to the local deity Antenociticus by Tineius Longus in celebration of his elevation to senatorial status. The base and the front and reverse of the capital are decorated – the capital potentially with elements of stylised drapery. The focus of the altar is missing and the rough nature of the top may indicate it once supported a statue.
The inscription reads:
To the god Antenociticus, Tineius Longus (set this up) having, while prefect of cavalry, been adorned with the (senatorial) broad stripe and designated quaestor by the decrees of our best and greatest Emperors, under Ulpius Marcellus, consular governor.
For more information see:
Antenociticus
Ulpius Marcellus
By John McCarthy – Project Manager