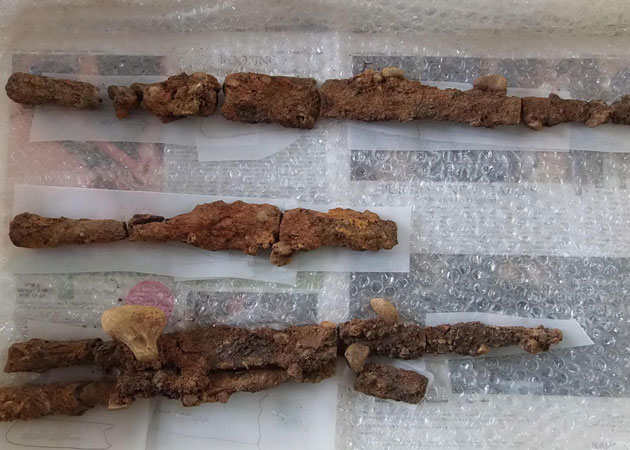 Yesterday (13th September), a photographer from the Colchester Gazette came to Roman Circus House to photograph Trust archaeologist Don Shimmin with some of his finds from Playgolf Colchester. Yesterday the focus was on five corroded iron artefacts which have just been identified as spearheads or lanceheads. These have been X-rayed by the Colchester Museum Service and are now being studied so that we can start writing our report on the fieldwork.

The Trust is conducting a watching brief on works at Playgolf Colchester at Lexden (near Colchester). A pit containing an amphora and cremated human bone has already been discovered on the site, representing a Late Iron Age-early Roman burial. The spearheads or lanceheads are also Late Iron Age-early Roman and derive from a second burial. Both interments lay inside a large, square funerary enclosure defined by a ditch.

The Playgolf Colchester site is not far from the remarkable archaeological site which the Trust excavated at Stanway in phases in 1987-2003, and it is very similar to it. The Stanway site included Iron Age and Roman funerary enclosures and burials and in its turn displayed similarities with funerary sites at St Albans and in northern Gaul. The Stanway site is one of the most important funerary sites in eastern England and it contained the burials of the local ruling elite who lived in the years before and after the Roman invasion of AD 43. Both the Playgolf Colchester site and the Stanway site lie within the area of Camulodunum. The ‘warrior’ burial at Stanway produced a weapon (a spearhead), which was pretty exciting – but now one of the burials at Playgolf Colchester has produced five! (For more information on the Stanway site, see our report on the excavations, Stanway: an elite burial site at Camulodunum, by Trust director Philip Crummy et al, Britannia Monograph 24, 2007).