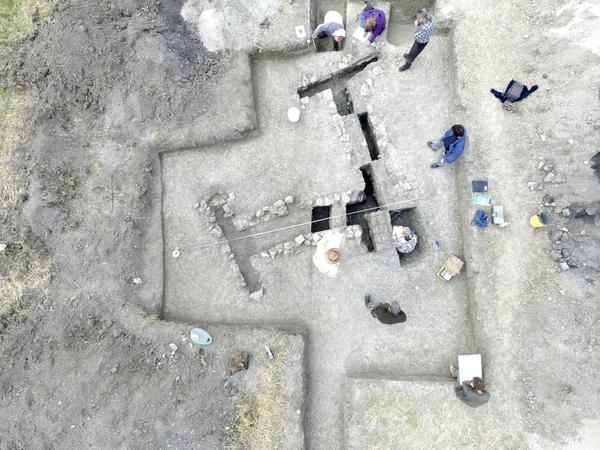 This was the fourth of five seasons of the Wiltshire Archaeology Field Group’s project at Mother Anthony’s Well near Devizes, led jointly by Phil Andrews and Jan Dando, with geophysical support from Dave Sabin and Kerry Donaldson of Archaeological Surveys Ltd.

It has proved a very successful programme of evaluation/excavation, following earlier geophysical survey and fieldwalking, on an intriguing but poorly understood site focused around a spring at the foot of Roundway Hill.

A summary of the previous seasons’ results was reported in the last Wiltshire Archaeological and Natural History Magazine, with discoveries including a pair of Late Neolithic/Early Bronze Age oval enclosures – one containing a pit with a significant assemblage of Grooved Ware, animal bone and worked flint, a Middle Bronze Age D-shaped enclosure and two Late Bronze Age/Early Iron Age enclosures. The extensive Romano-British remains spanned the late 1st−4th century and comprised a probable farmstead which lay close to the spring and around a long-lived trackway. Although few building remains were identified, there was a sequence of enclosures, several well preserved crop dryers and a midden.

In 2017 part of an Early Iron Age roundhouse and a pit were recorded in one of the late prehistoric enclosures, as well as the remains of a further Romano-British building with stone footings that had been used as a smithy. However, the highlight was the discovery of a probable Roman water shrine, its location indicated by a strong geophysical anomaly. This was a 2 m deep, oval, stone-lined structure with an outlet to the stream to the south-east. Lined with opus signinum and roofed with stone tiles, it appears to have been constructed around a spring – the original Mother Anthony’s Well! This may not have been the only structure of interest in the vicinity, for an L-shaped trench containing large, closely-spaced postholes and some painted wall plaster hints at the presence of another, possibly related building. We clearly have something more than a simple farmstead next to the spring, the only one in the area which – in living memory – has never been known to dry up.

We will return in 2018 to further unravel the complex history of this important site, and then in 2019 get together to analyse and prepare the results for publication.