The battle of June 18, 1815, saw British and Prussian forces defeat Napoleon’s French in what is now Belgium, dealing the final blow to the empire he had established, at a cost of almost 50,000 dead or wounded on both sides. The team includes international archaeologists and detectorists along with British veterans as well as some still serving in the Coldstream Guards.  The team  have been working on site at Waterloo on the project’s first excavations. Through a combination of Geo-physical survey work by the University of Ghent, metal detecting and a series of test trenches, the Waterloo Uncovered team has started to explore the area of a former wood that dominated the French army’s approach to the Hougoumont farm buildings which were defended by regiments including the Coldstream Guards.  A number of spent musket balls fired by both British and French troops have been found at the Southern extremity of this wood; these are thought to be some of the first shots fired in the Battle.

“Waterloo Uncovered”, the first major international archaeological project at the battlefield, was developed by 37-year-old former soldier Mark Evans, himself diagnosed with post-traumatic stress disorder after serving seven months in Afghanistan in 2008. At Hougoumont Farm, which Evans’s former regiment, the Coldstream Guards, helped to defend against the first assault of the battle, soldiers and veterans now dig alongside archaeologists from Britain, Belgium, France and Germany. “They’ve been there, they’ve seen it,” Evans said. “A different time and a different place, but they understand the confusion; they understand how ground is so important to cover and to make into advances.” He added  “It’s been amazing! Our team of soldiers, veterans and top archaeologists has worked so well together and achieved so much. Understanding what happened in the woods is key to understanding what happened at Hougoumont. Having soldiers and veterans – with real experience of battle – offers a unique perspective on what it must have been like to have fought on that day 200 years ago.”

Metal detectors and digging have so far uncovered coins, buttons, and English and French musket balls that the project’s lead archaeologist, Tony Pollard, believes to be from the first shots fired during the battle. Metal detecting survey, of the area of the former wood to the south of the Hougoumont buildings has produced spent and unfired musket shots at the southern -most tip of the wood, as well as fragments of firearms and clothing such as uniform buttons. We know that shots were exchanged between the French and Allied armies in these woods during the night before the battle, as the French probed the allied position and the first real fighting took place here.   Tony Pollard is confident these shots were fired very early in the battle, probably in these first exchanges. The team will also investigate anomalies shown in geo-physical surveys taken around the farm, which could be the final resting places of soldiers who have lain undiscovered for 200 years. 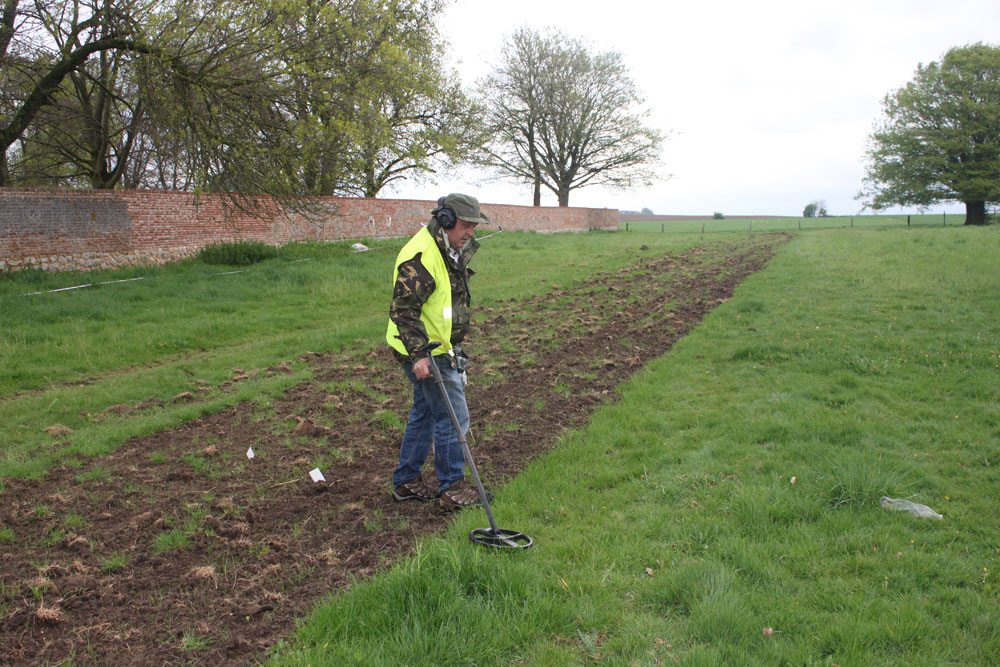 Waterloo Uncovered is a groundbreaking archaeological project to investigate the battlefield of Waterloo. In April 2015, the battle’s bicentenary year, a team of top European archaeologists and British military veterans will begin survey work around the area of Hougoumont Farm. The project is a partnership between Operation Nightingale, the Service de l’archéologie-Direction extérieure du Brabant wallon, the Centre for Battlefield Archaeology, Glasgow University, the Human Identification Centre, Dundee University and the Dept. Soil Management of the Ghent University, Belgium. It is supported by Project Hougoumont, the Coldstream Guards, Waterloo200 and the MoD. Devised as a one-year project, the work carried out in 2015 has the potential to form the basis of a longer-term project if desired.

DONATIONS: Waterloo Uncovered is a not-for-profit organisation and is looking for donations to help meet the project’s operating costs.

For further information on the project visit:  www.waterloouncovered.com

Recording of the Netheravon Cremation Urn