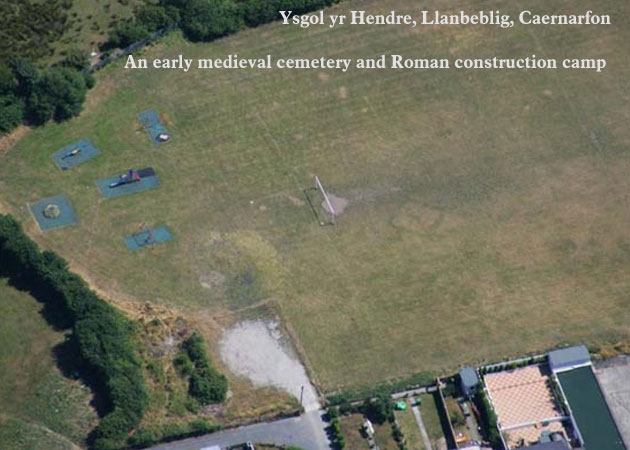 Gwynedd Archaeological Trust will be carrying out community excavations within the grounds of Ysgol yr Hendre School, Caernarfon over a period of 2 weeks starting July 10, 2013. In 2010 and 2011 most of the site was excavated by the Trust on behalf of Gwynedd Council. These excavations revealed several periods of use, including a series of pit ovens of Roman military type, which date from the time of the construction of the nearby fort at Segontium. It is likely that they mark the site of a temporary camp used by the soldiers building the fort. Lying amongst the ovens was an Early Medieval cemetery, dating from the 6th century AD. Approximately 40 graves were found, some of which were surrounded by ditched enclosures. The cemetery indicates a resident population living in the area several generations after the fort had been abandoned.

Archaeological excavations in 2010 and 2011 prior to the construction of a new school at Llanbeblig, Caernarfon, Gwynedd revealed an early medieval cemetery with five mortuary enclosures. A series of Roman military ovens were also found, possibly representing a camp used by soldiers who built the fort at Segontium. Other features found included a Neolithic pit and medieval pits and gullies.

In 2006 while flying over Caernarfon taking aerial photographs for the Royal Commission on the Ancient and Historical Monuments of Wales Toby Driver spotted and photographed a square green mark in the parched grass of the playing fields next to the Tŷ Gwyn housing estate.

Toby recognised the site as an enclosed grave. This is a type of site found throughout western Britain, and usually dates from the 5th to 7th centuries AD. An opportunity to examine the site more closely came when Cyngor Gwynedd Council chose the fields at Tŷ Gwyn for the construction of a new school. Gwynedd Archaeological Trust was employed to carry out a programme of work to investigate the area. Initial surveys were undertaken which involved examining archive records, carrying out geophysical surveys and excavating trial trenches. These revealed the presence of at least one more enclosed grave, a series of unenclosed graves and other features. Full excavation was undertaken of the whole area to be developed. The main phase of the excavation started on 5th April 2010 and was completed on 30th July 2010, with a further shorter phase of excavation between 16th May 2011 and 27th May 2011.