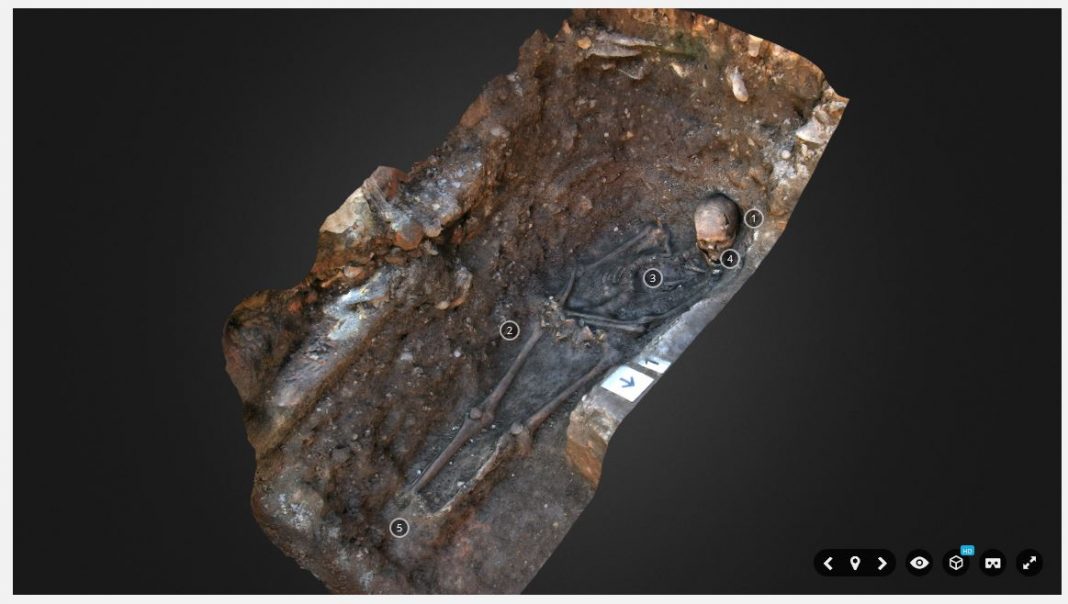 Archaeologists from the University of Leicester have used sophisticated photogrammetry software to create an interactive digital model of King Richard III’s grave.

The fully rotatable computer model, created by University of Leicester Archaeological Services (ULAS) shows the king’s remains in-situ as they were found during the 2012 archaeological excavation. Using photographs taken during the project, sophisticated photogrammetry software has been used to create an accurate representation of the grave and the skeleton.

The interactive model, which can be explored via the 3D sharing platform Sketchfab (https://skfb.ly/Kn9F), graphically reveals in a new and immersive way the minimal reverence with which the king was buried.

Mathew Morris, Site Supervisor for ULAS said: “Photographs and drawings of the grave, whilst dramatic, are only two-dimensional and do not always best show nuances in spatial relationships that a three-dimensional model can. Photogrammetry provides a fantastic analytical tool that allows us to examine the grave from angles that would have been physically difficult or impossible to achieve during the excavation, and gives us the ability to continue to examine the king’s grave long after the excavation has finished.”

Archaeologists discovered that the poorly dug grave was not only too short for the king, but was messily dug with sloping sides and an uneven base. This made it awkward for the burial party to lay the body out neatly in the grave. Instead, it was left slightly slumped on one side with the head propped up because it would not fit properly – physical evidence which fits with historical accounts which say that Richard III was buried without pomp or solemn funeral.

The remains of King Richard III were found by a team of archaeologists from the University of Leicester beneath a city centre car park in Leicester in 2012.

Mathew Morris added: “During the excavation in 2012 we took photographs of the skeleton from multiple angles to create a lasting record of how the king’s bones were positioned in the grave before we exhumed them. These photos were not taken with photogrammetry in mind but the software is incredibly versatile and can be applied retrospectively to create this superb model.”

Photogrammetry is used in a wide range of fields from topographic mapping to the movie and gaming industry and it is often used by archaeologists because it provides a quick, extremely versatile and cost-effective method of recording and analysing complex objects and surfaces using software that turns multiple two-dimensional digital photographs into a three-dimensional model. Under suitable conditions, the technique can produce geo-referenced results similar to those of laser scanning and can be applied to photographs taken during archaeological excavations, building surveys and laboratory conservation.

The software, Agisoft’s Photoscan, looks for points of commonality in overlapping photographs of a single object or surface from which it can extrapolate a three-dimensional point cloud which can be converted to a polygon mesh. The photographs can then also be used to render the surface reconstruction to create a photo-realistic effect.

King Richard III’s grave and other digital models of recent archaeological discoveries made by ULAS are all viewable via the 3D sharing platform Sketchfab (https://sketchfab.com/leicester-archaeology) for everyone to explore.

They can also be used for educational purposes, providing a fun and interactive tool that can be used in the classroom by schools to study archaeological material that is often only accessible in museums.

Constructing the life of the mesolithic