Today, the volunteers washed and bagged a small group of fragments from an sgraffito-decorated pottery vessel. As the pottery from the site is being processed, it has not yet been studied by the Trust’s pottery specialist, and there may be more fragments of the vessel in the site’s pottery assemblage. However, these sgraffito-decorated fragments look like the sgraffito pottery which was made in Cambridgeshire or in the Cambridge style in the 14th and 15th centuries. The pottery is called ‘sgraffito’ because it is decorated with lines which were incised through the off-white slip (liquid clay) to reveal the red clay fabric underneath *.

The sgraffito fragments are of very fine and well-made pottery. Trust archaeologists consider sgraffito pottery to be rare in Essex; and these fragments probably represent a large jug which, in its day, would have been a very high-quality and even ostentatious item of table ware, perhaps used to contain wine.

It must have been owned by a very prosperous individual, perhaps a very successful cutler/cutlery merchant in Thaxted. The inscribed lines seem to represent leaves and plants. You can see that the lines were inscribed by hand, and they vividly evoke the story of the vessel and the people who handled it in life: the potter who made and decorated it, servants who would have used it, the people who enjoyed it at their fine table, and even the person who damaged or broke it and threw it out in the rubbish-pit…

See two previous items about our evaluation and excavation at Thaxted.
http://www.bajrfed.co.uk/bajrpress/fascinating-medieval-finds-from-historic-thaxted-essex/

The image shows Trust volunteers Jane and Callum at work. 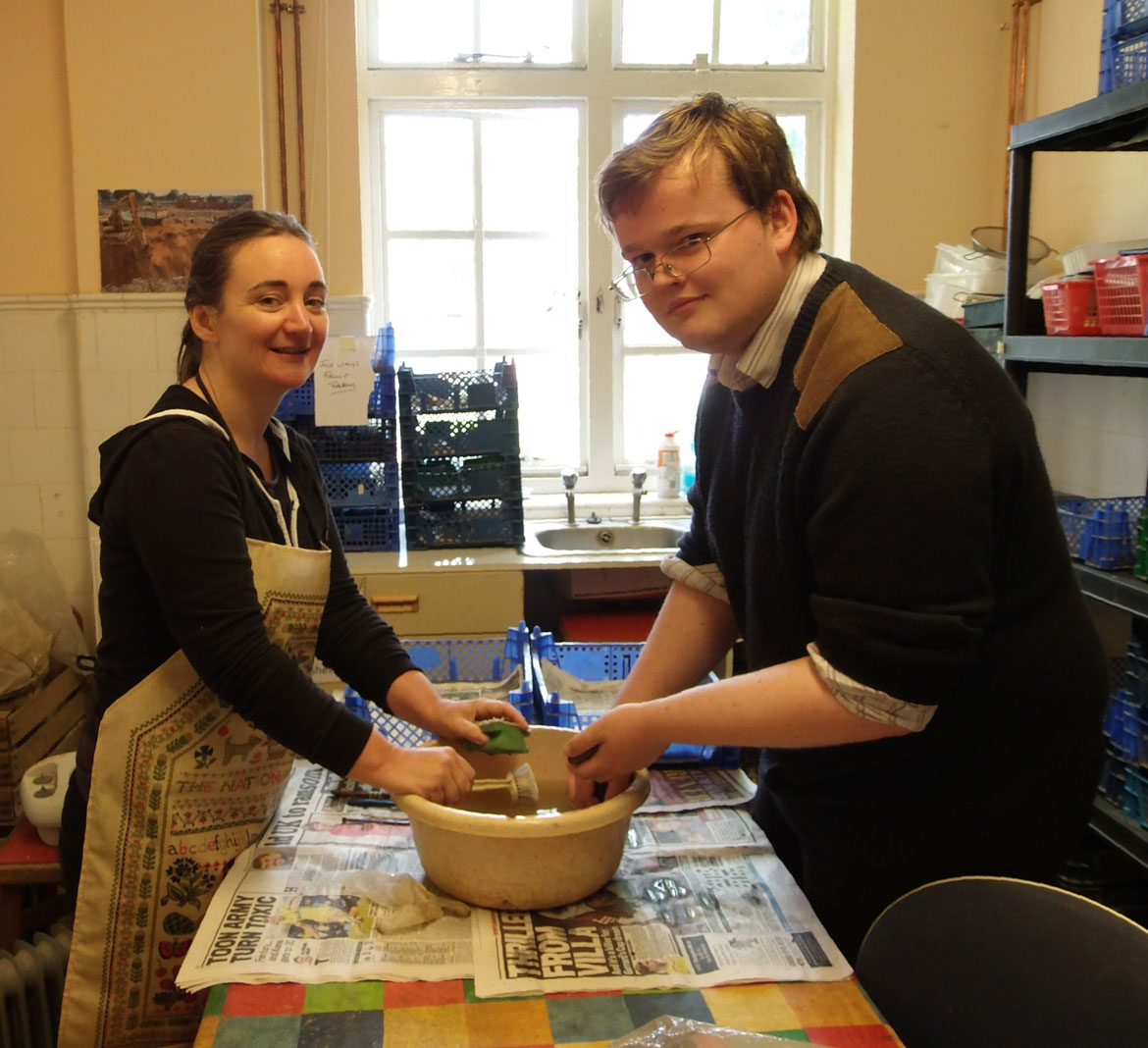 * A few fragments of sgraffito pottery were excavated at Thaxted in 1984 by the Essex County Council Field Archaeology Unit and reported in 1989 (in ‘A late medieval cutlery manufacturing site at Weaverhead Lane, Thaxted’, by D D Andrews, in Essex Archaeology and History, 20). This report includes a description of sgraffito pottery as being made of Fabric 21, ‘a hard, usually oxidised somewhat sandy fabric with slightly pimply surfaces, made from the 14th-16th centuries … [the fabric shows] little visible sand. More conspicuous are occasional white grits and pieces of red iron ore. The undecorated surfaces are slightly rough to the touch and pimply in appearance. The slip is usually applied only to the exterior of the vessel. The incised lines are quite wide (1-3 mm) and neatly done, and the vessels are covered with a yellowish glaze, sometimes speckled with green. Only small sherds are present, but the forms are normally jugs’. Fabric 21 is defined as ‘medieval sandy orange wares’ in Colchester Archaeological Report 7: the post-Roman pottery from excavations in Colchester, 1971-1985 (CAR 7, by John Cotter, 2000, pages 166 & 168). In CAR 7, sgraffito pottery or ware is catalogued as Fabric 21C, ‘Cambridge style’, with red fabric, white slip, incised decoration, and a green copper-flecked or clear glaze. Small numbers of sgraffito pottery fragments are recorded from Colchester, Chelmsford, Writtle, Rivenhall, Hadleigh Castle and other sites in Essex, with more from Cambridge and Rampton.