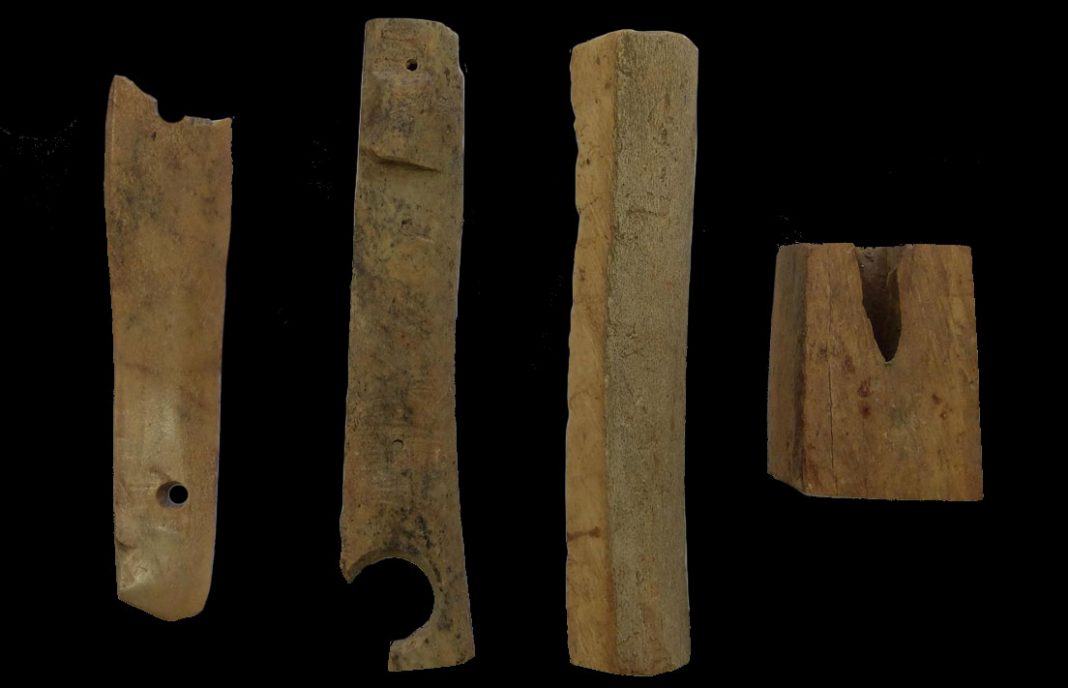 The finds from both the evaluation and the excavation are very interesting: they include a large quantity of worked bone offcuts and ‘wasters’ (spoilt products), representing the important medieval cutlery industry of Thaxted. Previous archaeological investigations in Thaxted had produced only a small amount of these offcuts and wasters. The cutlery industry here would have included the production of worked bone handles for the iron blades. The excavation also produced a large fragment of stone which might have formed part of a knife-grinding machine. The worked bone items derive from rubbish-pits on the site associated with a medieval-period workshop, probably that of a hafter, or a cutler who employed a hafter or did their own hafting.

According to the Worshipful Company of Cutlers in London, the English word ‘cutler’ is derived from the Latin ‘cutellarius’ through the Old French ‘coutelier’, and means someone who makes or sells implements with a cutting edge – ‘cutlery’. In the medieval period, Thaxted was known for its cutlery industry. Because of the industry, the village became urban by the mid 14th century, with 90 houses and 36 shops (Medieval England: Towns, Commerce and Crafts, 1086-1348, by E Miller & J Hatcher, 1995) . There was a Cutlers’ Guild in Thaxted and the Guildhall, near the parish church, was the Cutlers’ Guildhall; there is also the nearby ‘Cutlers Green’. Thaxted was one of the main competitors of the medieval cutlery industry in Sheffield (Mesters to Masters: A History of the Company of Cutlers in Hallamshire, edited by C Binfield & D Hey, 1997). However, unlike Sheffield, Thaxted had no local source of stone or water power to grind stone, factors which are suggested for the decline of its cutlery industry.

The medieval cutlery industry in Thaxted would have involved several different trades: bladesmiths, hafters, sheathers and cutlers. A bladesmith made the metal blades of ‘cutlery’, such as knives, swords, daggers and other blades. A hafter would make the handles for blades using animal bone and, perhaps, other materials. A sheather would make the leather sheaths for daggers and knives. A cutler would combine all the parts and finish the cutlery implements, sell them, and also mend cutlery. Bone-working craftsmen worked in different trades and produced different categories of goods, for example, bone combs and bone dice as well as bone handles for cutlery. They would all have depended on local skinners and tanners for their supplies of animal bone. London’s medieval trade gild of the Cutlers’ Company* included bladesmiths and hafters: the hafters made handles in a range of materials (bone, ivory, horn, metalwork and even precious metals). (A trade or craft gild or guild was a trade association which regulated trades, products and craftsmen and protected them and their customers.)

The association of different cutlery trades is described in English medieval industries: craftsmen, techniques, products (edited by J Blair & N Ramsay, 1991) – ‘… The men who finished and sold goods tended to achieve prominence in their field. The sheathers and bladesmiths, for instance, came to be dominated by the cutlers in a process of which one stage can be seen in a City of London ordinance in 1408… The cutlers … were accustomed ‘to sell knives fully prepared and decorated, to all buyers whatsoever; but that every knife is prepared separately by three different crafts, first, the blade by smiths called “bladsmythes”, the handle and other fitting work by the cutlers, and the sheath by the sheathers …’ …’.  Also ‘… in 1415 the York horners joined with the cutlers, bladesmiths, sheathers, scalers [i.e. hafters] and bucklemakers to perform a mystery play, some degree of common interest perhaps being implied by this association …’. (Interestingly, ‘… in 1310 Adam, a cutler from Thaxted, paid one mark to the commune of London and opened shop …’ .)

There is a brief description of the Thaxted cutlery industry in Historic towns in Essex: Thaxted – historic towns assessment report, although it does not mention hafters: ‘… In the fourteenth century the documents record rapid expansion in the town, when it became the centre of a thriving cutlery industry. In the Poll Tax returns of 1393 there were 79 cutlers, 11 smiths, 4 sheathers and 2 goldsmiths, which means that over a third of the adult male population were employed in the cutlery and associated trades… The earliest references to the industry in Thaxted are late thirteenth century… The fourteenth century and later expansion, contrary to national economic trends, was due to the cutlers alone. The industry appears to have died out by the sixteenth century …’ (English Heritage 1999).

The images show a map of Thaxted and some of the small finds from the excavation. [Image to follow.]

* See the history of the Worshipful Company of Cutlers on their web-site at   www.cutlerslondon.co.uk/company/history/ – ‘… It is known that a Gild of Cutlers existed in the City of London in the 13th century, comprised of cutlers who had settled in the vicinity of Cheapside. As was the case with the other trade guilds of the day, its function was to protect the interests of its members, to attend to their welfare, and to ensure that high standards of quality were maintained. The first Ordinances were granted in 1344 by the Mayor and Aldermen, which gave the Gild power of search and assay of all manner of cutlery …

The cutler was not simply an artisan but a designer and assembler of parts who produced the finished article, which he then sold in the market place. The blades were made by the bladesmiths, and the scabbards or sheaths by the sheathers, whilst the skills of other trades such as the gilders and furbishers and grinders would be used to produce the finished article. Eventually, all these subsidiary crafts were absorbed into the Cutlers Company, and by the 16th century the Company controlled the entire trade …’.