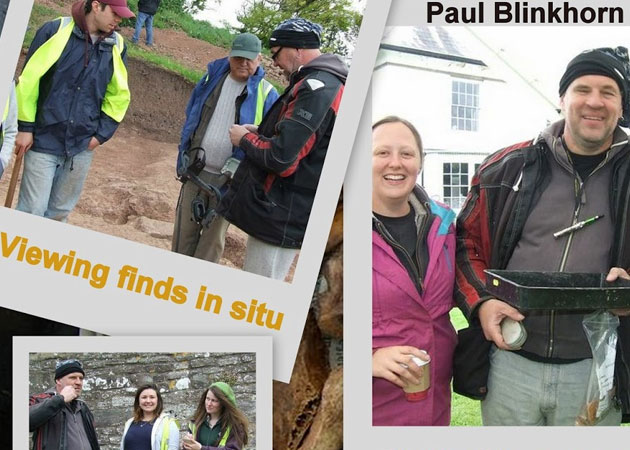 Paul Blinkhorn has been developing his expertise in Anglo-Saxon & Medieval pottery since 1983. After completing his Archaeology degree at Bradford, he spent two years on the digging circuit before making the jump into the detailed study of ceramics. To date, he has looked at some two and a half million sherds. Paul visited the University of Bristol’s archaeology project at Berkeley this May and sat down to talk to us about his love of pots, archaeology and his work on Time Team.

Tell us about your experiences on Time Team?

I got onto that completely by accident. They were digging a Saxon monastic site in Norfolk. At the time I was doing a research project for English Heritage on Ipswich Ware (a standard type of Saxon pottery) when Andrew Rogerson, the county archaeologist, said “come on up on day three and have a look around”. So I was wandering round the site with him when I got into one of the trenches where this huge tray of pottery was. I started picking the sherds up, talking a bit about them, when the film crew came thundering over the horizon and said “would you like to say all that again in two minutes forty-five seconds?” It was ten seconds before I was on when they said “you do know this is going out live to two and half million people…and three…two…” About three days later I got a phone call from Time Team who had come across my scene during the editing and said “who is that guy?” And that was the problem…nobody knew who I was! Luckily, Andrew told them and they managed to track me down and sign me up.

Want to read more of this interview?
http://bristoldigberkeley.blogspot.co.uk/2013/05/interview-with-ceramic-specialist-paul.html

Archaeology and the historic trams of Edinburgh