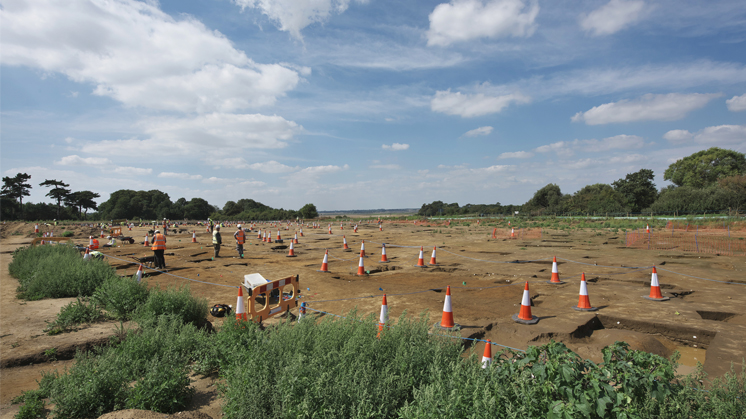 Excavations have led to the discovery of samples from the Bronze Age, the Iron Age, the Roman period, the Anglo-Saxon period, and even the medieval period.

The first thing that comes to mind when you imagine an offshore wind farm is not exactly the image of hundreds of archaeologists combing through 60 hectares of Suffolk countryside with metal detectors. This highlights the magnitude of the efforts needed to create an energy project as important as that of East Anglia ONE, explains Joanna Young, Head of Interest Group Relations at ScottishPower Renewables.

Supported by the British subsidiary of Iberdrola as part of its pioneering energy project, this is one of the largest archaeological excavations in Europe, exposing archaeological remains that provide pertinent information on the history of Suffolk County.

“We decided to invest in underground cables to carry energy that will be generated by the turbines of the East Anglia ONE offshore wind farm and sent to the national electricity grid through a new electricity conversion station in Bramford. Instead of building power transmission towers, the project involves deploying 37 Km of underground cables“, notes Joanna Young.

In addition to evidence of houses, agricultural and industrial sites, a wide variety of ceramics have been found, along with tools, coins, and a wide range of eco- and artefacts of archaeological value, including green glazed bellarmine, popular in medieval homes of thirteenth-century England.

However, these are not the first significant findings in Suffolk County. At the end of 1992, the ‘Hoxne treasure‘ was found in this area, a collection containing the largest collection of gold, silver, and bronze coins from the fourth and fifth centuries recovered from the Roman Empire. More specifically, this treasure constituted 14,865 gold, silver, and bronze coins, as well as 200 pieces of silverware and gold jewellery, which are now preserved at the British Museum in London.

“We know a lot more about Suffolk history today than we did a year ago”, explains Richard Newman, head of Wardell Armstrong, the company tasked with overseeing the work of 400 archaeologists and the 20 members of the Ipswich & District Metal Detector club who have participated in the excavation.