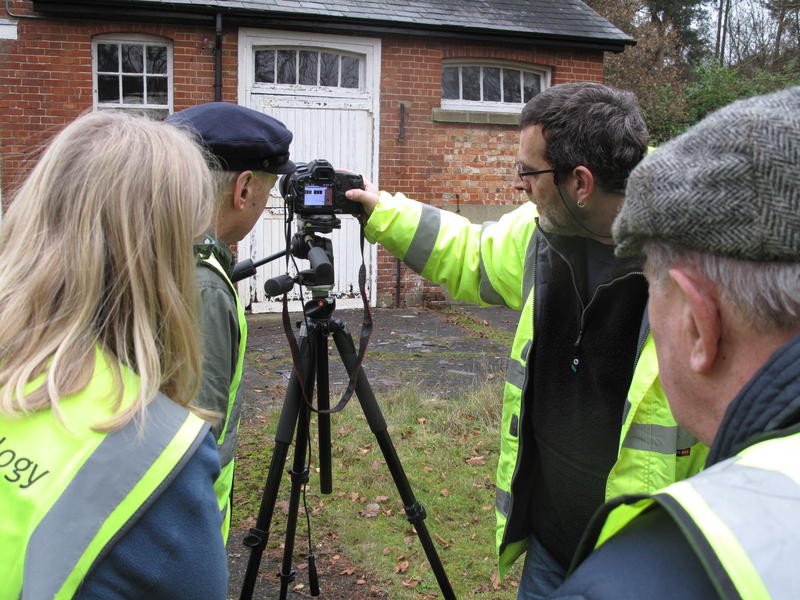 Share on Facebook
Tweet on Twitter
The site is due for redevelopment and Wessex Archaeology was commissioned to record the buildings by AECOM on behalf of their client. Part of the remit of the recording was to involve the local community and members of the Woolmer Forest Heritage Society were invited onto the site to learn more about the interesting buildings there and the ways in which they are being recorded.
Led by Wessex Archaeology’s built heritage specialists, Bob Davis and Grace Flood, the day began with a tour of the former military base; the first brick built barracks in the area, completed in 1907. Background research undertaken by Grace at the English Heritage Archives revealed original drawings of some of the buildings which were shown to the group.
Members of the society were then offered a hands-on training session in photographic techniques for recording historic buildings. The group enjoyed this useful opportunity to hone their skills, as well as the opportunity to explore the now unused barracks, which are due for demolition.
Louisburg Barracks were named after a battle of the Seven Years War which took place between June and July 1758.

The Geordie God of Binchester!

Welsh Heritage on show via an App