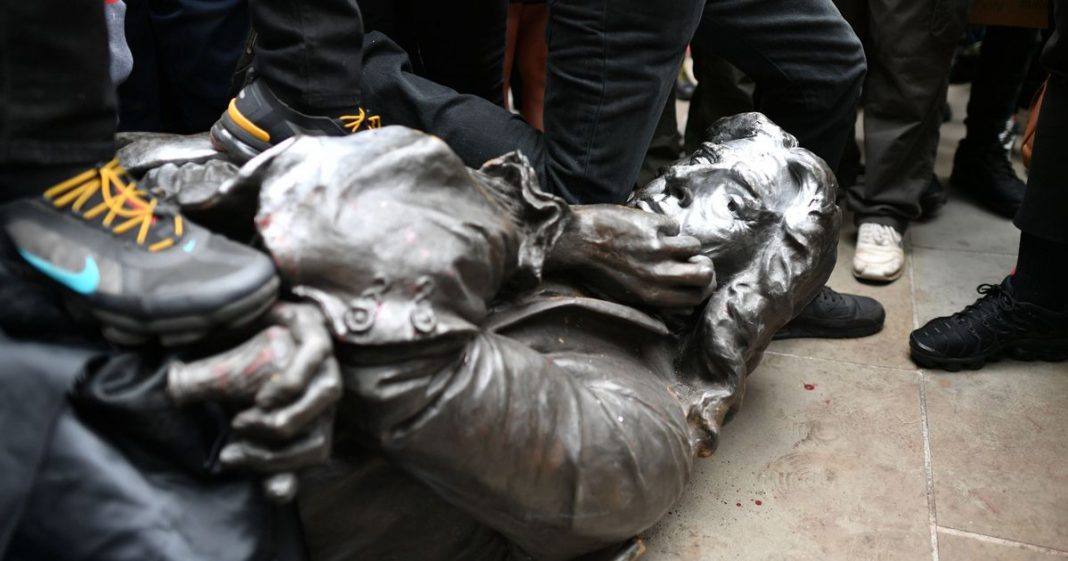 After the marathon debate regarding the destruction of the Colston Statue, I promised to write up the synopsis

There are several articles written by far better people than I, and a couple of excellent links to articles sent to me afterwards, I include the at the end.

Here in Scotland , The City of Edinburgh is proposing to dedicate a controversial 1827 Henry Dundas monument to those enslaved because of his actions.   As Home Secretary he used his influence to frustrate efforts to end the slave trade. At the outbreak of war with France he became Minister for War, and many historians blame him for much of the lack of organisation and confused planning in the campaigns that followed. In 1806 he was impeached for the misuse of public funds, and although found not guilty he never held office again.   Someone to look up to?   New signage will explain that Dundas was “instrumental in deferring the abolition of the Atlantic slave trade”.   Here is an example of a monument left in place, rededicated and used as an aid to teaching people.   No longer glorifying what sounds like a rather unpleasant man (  not matter when he lived)   but holding him to account, and explain the reality of what he did.

Most of the 103 people who directly involved themselves in the discussion came down firmly (though not all)  on the side that after years of campaigning and controversy about having this (and other statues) the statue was going to have to be removed, and this was inevitable.  After being mentioned as another candidate long over due, the statue of Robert Milligan was removed by the Canal and River Trust to “recognise the wishes of the community” A statue of noted slaveholder Robert Milligan has been removed from outside the Museum of London Docklands

Where disagreement rose, it was in the way the statue was dealt with next.  Should it remain in the water, where he had been instrumental in throwing over 19,000 souls to their death OR taken out and re-erected broken on the plinth, or recast into a monument for those that had their lives recast into slavery.   Some suggested placing in a museum where the interpretation could again be used to explain the past.

This is where I noticed that so so many arguments elsewhere deviated into (frankly offensive and ridiculous directions)  Pull down the Pyramids they cry,,  what about the Roman slaves?  If you remove the statues you are whitewashing history, erasing it, and we can’t learn.  To all those people, I say one thing.  (well two actually)  and here I quote from Lake Placid.  “They conceal information in a thing called books”   –  I normally learn about the  past from literature written about it, and history, proper messy history is there to be exposed and learned, and to my mind, I normally don’t do it by walking around looking at statues.  The other point is that Statues are memorials to glorify an individual –  The Edinburgh example is a valid method of dealing with him…  I would prefer him gone, but that is a debate to be had.   This Statue graveyard is one of other options.  http://www.mementopark.hu/  where you actually can use statues to teach the history

You cannot nullify an act by saying that oh but you will have to take down ‘insert pyramid, amphitheatre or large building’  you can, and here is the tricky part for some, deal with several issues at once.  (like the pyramids were not built by slaves to start with!)

Archaeologists are renowned for having panic attacks if you suggest that a bag of post med body sherds are chucked,  so it is understandable that we prefer to keep, rather than destroy..  BUT  archaeology is destruction, history is about change, is about reinterpretation all the things that makes our job happen..  Thus, it was heartening to see reasonable discussion around a topic like this.  Conflating ISIS in Syria and rolling Colston into the river is such a baffling argument it holds no water.   One was reacting to the statue of a man who was complicit in a slavery and oppression that has echoes to this day, the other was to vindictively upset the world for not other reason than they could.  It had nothing to do with Radical Islam being oppressed by the Palmyra Temple – indeed the Muslims living there was centuries never had an issue.

Does archaeology have anything to do with politics (and visa versa)  is  another conversation, for another day.

Many of us felt it should be replaced by something that represent today, todays feelings and values, represents the need to thank those that succeeded, despite a heavy burden that had been draped over them because of people like Colston.  The act has sparked discussion ( and highlighted both a lack of education and a deep resentment in our society)  where slavery and the centuries of oppression that continue to this day as a result , need to be addressed.  We as archaeologists have our place, and it is important.  We must be forceful in our actions, and purposeful in our meaning.

Some accused BAJR of censoring valid views and stifling debate. Far from it,  if I had imposed my own views on the debate it would not have worked.  I only removed 8 comments out of nearly 450   –   so not bad.     We saw history made …   and it was made by the people we supposedly serve.

I want to leave a final word with Sadie Watson:

“I am often disappointed at how conservative (small c) our sector is. We want ‘public engagement’ and when it happens in an act of liberation we moan about how the old stuff has been vandalised”

Whelan Y  (20002) The construction and destruction of a colonial landscape: monuments to British monarchs in Dublin before and after independence.  Journal of Historical Geography ( 508-533)http://www.ggy.bris.ac.uk/personal/YvonneWhelan/HistoricalGeographyArtice.pdf


Thanks to all of you for taking part in the discussion