Home General News 2km-wide ring of ‘shafts’ up to 10m across and 5m deep found... 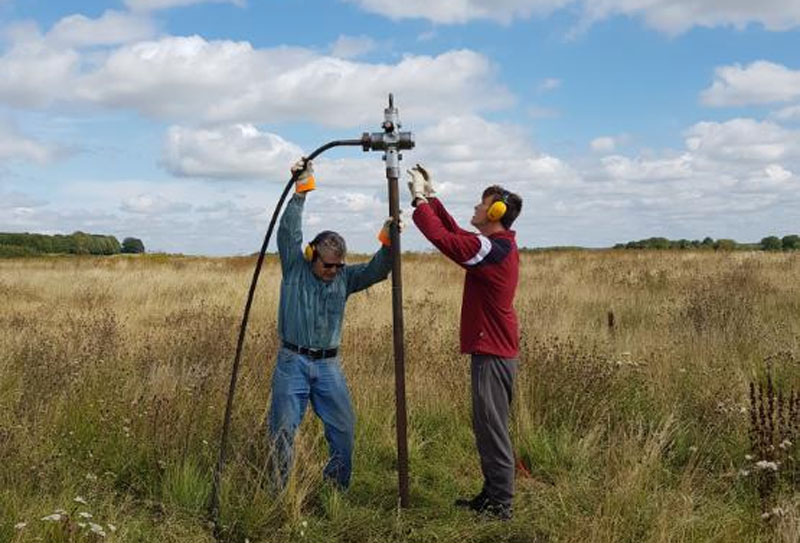 What could be one of the largest prehistoric sites in the UK has been discovered near Stonehenge by a consortium of archaeologists led by the University of Bradford.

A massive 2km-wide ring of prehistoric ‘shafts’ up to 10m across and 5m deep has been discovered around the ‘super henge’ at Durrington Walls and the famous site at Woodhenge. The structures have been carbon dated to about 2500BC.

Archaeologists believe the circle of shaft marks a boundary around the massive henge at Durrington. It is thought the features, along with an  internal post line, could have guided people towards the religious sites and warned others not to cross the boundary.

Prof Vince Gaffney, 50th Anniversary Chair of the School of Archaeological and Forensic Sciences in the Faculty of Life Sciences, said it was extraordinary such a major find had been made so close to Stonehenge.

“The area around Stonehenge is amongst the most studied archaeological landscapes on earth and it is remarkable that the application of new technology can still lead to the discovery of such a massive prehistoric structure which, currently, is significantly larger than any comparative prehistoric monument that we know of in Britain, at least.”

“When these pits were first noted it was thought they might be natural features – solution hollows in the chalk. Only when the larger picture emerged, through the geophysical surveys undertaken as part of the Stonehenge Hidden Landscape Project, could we join the dots and see there was a pattern on a massive scale.”

Researchers have identified up to 20 shafts but estimate there may have been more than 30 originally.

“The size of the shafts and circuit surrounding Durrington Walls is without precedent within the UK. It demonstrates the significance of Durrington Walls Henge, the complexity of the monumental structures within the Stonehenge landscape, and the capacity and desire of Neolithic communities to record their cosmological belief systems in ways, and at a scale, that we had never previously anticipated.”

Dr Nick Snashall, National Trust archaeologist for the Stonehenge and Avebury World Heritage Site, said: “As the place where the builders of Stonehenge lived and feasted Durrington Walls is key to unlocking the story of the wider Stonehenge landscape, and this astonishing discovery offers us new insights into the lives and beliefs of our Neolithic ancestors.

“The Hidden Landscapes team have combined cutting-edge, archaeological fieldwork with good old-fashioned detective work to reveal this extraordinary discovery and write a whole new chapter in the story of the Stonehenge landscape.”

Publication of research at Durrington is available here as an open access article in Internet Archaeology – https://doi.org/10.11141/ia.55.4

Shipwreck Timbers Give up their Secrets