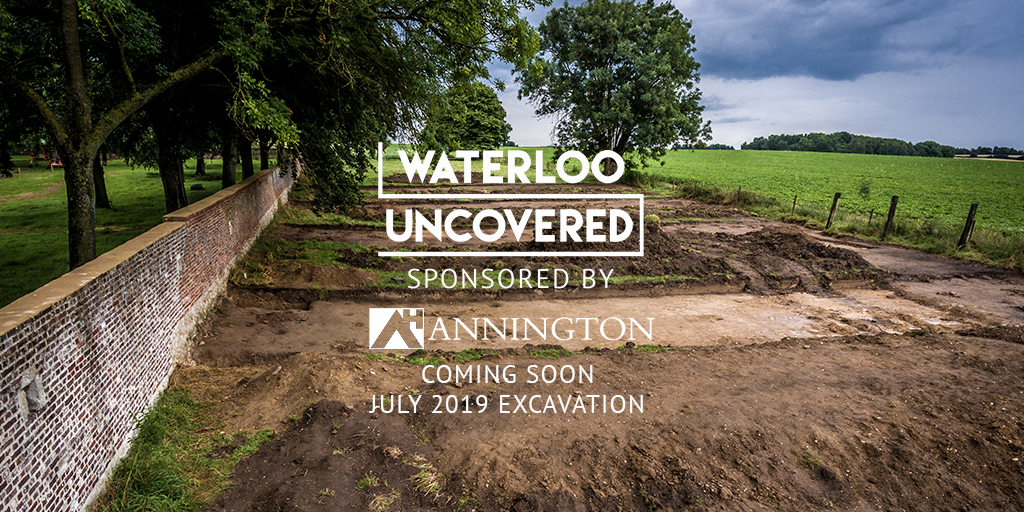 A team of military veterans and serving personnel, led by professional archaeologists, are about to begin excavating at the site of Wellington’s Field Hospital on the world-famous battlefield of Waterloo in Belgium.

The charity Waterloo Uncovered will, this July, explore the farm buildings of Mont St Jean, where thousands of wounded soldiers received primitive first aid during the battle of 1815, which ended in the crushing defeat of Napoleon.

“Once the cannons opened fire, the farm buildings rapidly overflowed with the wounded. Mont St Jean became a place of suffering and endurance. It’s possible that as many as 6000 casualties passed through the place. Many men died there.” says Professor Tony Pollard, lead Archaeologist for the project. “The site has never been excavated before. As an archaeologist this is a unique opportunity to look for evidence of the battle to save lives”.

Waterloo Uncovered combines world-class archaeology with a programme of care and recovery. Many of the military personnel involved have experienced service-related wounds and injuries, or suffer from Post Traumatic Stress Disorder (PTSD).  Taking part on the Dig can help people rebuild health and confidence, learn new skills and interests and give them the chance to mix with people from a variety of backgrounds.

“It will be thought-provoking and moving to be excavating on the site of the Field Hospital. Some of our team have themselves, experienced battlefield first aid.” Says Mark Evans, Chief Executive of Waterloo Uncovered. “The men of 1815 would have hoped for very little. Many of those who survived returned to an uncertain future because of their injuries. The care and recovery process has changed so much today. Waterloo Uncovered plays its part by offering a nine-month programme of support. The Dig is just the beginning”.

The Waterloo Uncovered team comprises a mix of nationalities. Dutch military veterans will once again be working in the trenches this year, reflecting the important role played by the Duke of Wellington’s Dutch allies during the battle.

“The Battle of Waterloo changed the face of Europe” says Colonel Ludy de Vos of the Dutch Veterans’ Institute, “We’re delighted for Dutch military personnel to be standing alongside British and international colleagues at a site so important to European history”.

Waterloo Uncovered has been excavating areas of the battlefield since 2015. In that time they have made important new discoveries about the intense and bloody fighting and about the men who took part in the battle.

This year’s dig is sponsored by Annington, one of the UK’s largest providers of privately rented property and a specialist in providing property for the Ministry of Defence.

“Annington have a long track record of working with the military” says Mark Evans “and we’re delighted to be able to build a partnership with them. It’s a recognition of the valuable help we offer military personnel through involvement with Waterloo Uncovered”

Waterloo Uncovered will be excavating at Waterloo from July 9 -19th.

For more information about the work of Waterloo Uncovered on the battlefield:www.waterloouncovered.com