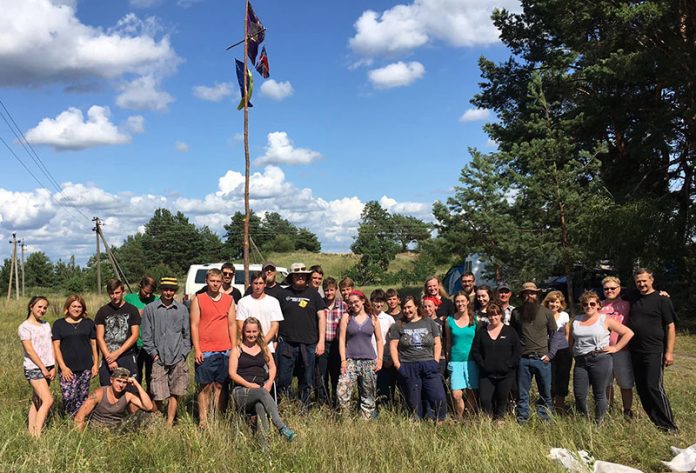 William Pidzamecky from the University of Nottingham’s Centre for the Study of the Viking Age is a Canadian PhD student whose ancestors hail from Ukraine in Eastern Europe and he’s on a mission to examine the country’s largely unexplored Viking heritage.

His recent expedition to Ukraine with a team of colleagues from Nottingham and writer and TV archaeologist Cat Jarman didn’t disappoint. Their findings shed new light on a Viking fort and settlement 50 miles south of Kiev about which little is known, as William explains in his own account of the expedition:

‘It’s a dream for anyone fascinated by the Vikings to get the chance to take part in excavations in Ukraine as there is so much we don’t know and so much to discover about the ancient Scandinavian footprint in this beautiful country.

Our target for further exploration this summer was the Chernihiv Viking Age ‘Rus’ settlement just outside the village of Vypovziz in the province of Chernihiv. The Vikings started moving south from Scandinavia to Ukraine in the late 9thcentury and this settlement of about one square kilometre dates from that period. Its heyday however was from the early to late 10thcentury before it was burned down, possibly in connection with a fight between the Grand Prince of Kiev and the Prince of Chernihiv.

The Vikings built a fort or citadel on a suitable area of land near a river and it’s similar to the Viking site in Repton, Nottinghamshire that was settled close to the river Trent. The Scandinavian invaders would have been in the fortified area as the garrison force, and the local Slavic population would have made up the open settlement around it. The Vikings gradually took over the Slavic tribal units who were not as organised. The Primary Chronicle, a 12th century Rus document, shows that it differed from tribe to tribe whether they submitted willingly or unwillingly. It even describes later Slavic revolts against later Rus’ princes.

Vypovziv was established to protect trade along the river route to Constantinople and was part of a vast network of Scandinavian centres stretching from Ladoga in the north, to Kiev and Byzantium in the south. The site is very important to scholars in mapping the expansion of the Vikings into Eastern Europe during the formation of the ancient Rus government of the region.

Having joined a previous archaeological dig on the site in 2018 I was very keen to lead a second excavation this summer, but this time using western digging methods to extend the excavations on an unexplored area on the central plain. Over a two-week period in July we were able to identify several phases of building and habitation based on dating of the finds and layering of ovens. Not only did this confirm continual habitation from the beginning to the end of the site’s existence but also has completely reshaped the interpretation of the site.

Initially, it was believed that the inhabitants only occupied the fringes of the terrace but now it seems that the open settlement stretched across the entire area. Importantly, this means that the population would have been much larger than first estimated.

You can’t put your trowel in the ground without finding at least five different things. The site is absolutely packed with objects and the sandy soil means high levels of preservation of ancient artefacts embedded in it. One day’s digging produced more stuff than we could catalogue on that day. We were excited to uncover some notable artefacts including the first ever woodworking axe on the site, a rare piece of antler with Borre style decoration, a silver acorn pendant, a silver Arabic Dirham dating to 805-903, worked antler/bone tools, a variety of knives, as well as a selection of glass beads.

The Ukrainian team from the Chernihiv Collegium were at the site at the same time and focused on investigating the port zone to identify the berths, docks and wooden objects from the structures as well as digging test trenches in order to find the 10thcentury burial mounds connected with the settlement.

We were there for two weeks this summer and we stayed on site in tents. Living conditions were fairly basic since it was essentially camping in the wilderness. There was a small village nearby which had a store and there were vehicles available for transportation to the nearest mid-sized town. We ate at a large table with benches outside. Meals were prepared by the Ukrainian team and we mostly ate pasta, buckwheat stew, and meat with potatoes. They were very good in accommodating any dietary requirements. We would bathe in the local river which after a long hot day was very refreshing. Solar camping showers were also available. We would get up at 7am and start work at 8am. We took a snack break at 12 and then had lunch at 3pm followed by dinner at 7pm. Our group generally continued working until 5pm. Digging and sifting were very labour intensive and required regular breaks for water.

During the digging itself, for the most part you simply focus on making sure that you trowel back at the appropriate depth as evenly as possible. You chat with the people around you while occasionally being pleasantly surprised when you find something other than pottery, small shards of bone, or ceramic building material. There is always a sense of anticipation, especially after the metal detector goes over the site and you happen to have something in your small section of the trench. The feeling of finding something important is always special. You feel super excited and even giddy while you show your discovery to everyone around you. I personally love being an archaeologist because it allows me to interact with the past in a very tactile way and I love digging up new and exciting things.

There are big differences in how the Ukrainians and we, their British guests, work. The Ukrainian team use a grid system where they set up 1m by 1m squares inside their trench and calculate spacial positions of finds and stratigraphy (the changes in soil layers) that way. Our team used a different system which divided the trench up into contexts which are usually demarcated by a change in soil colour/texture/type. These can be much larger or smaller than 1m by 1m squares and are usually amorphous but do allow for a whole feature to be excavated at the same time without items from other contexts interfering. We tend to use smaller trowels and the Ukrainians use larger shovels before sifting. At the end of the day, however, the results are very similar.

We catalogue all our finds in a database since we are not allowed to take them with us. This involves weighing them, counting them, and taking pictures if they are important. All the finds, including the ones the Ukrainian team found, are then collected and stored by the Ternosky Museum in Chernihiv.

The goal for the future is to make this excavation trip to Ukraine an annual enterprise which will solidify academic relations between Ukrainian and Western European scholars. Hopefully, next year we will be able to bring in some ground penetrating radar and LIDAR to get a better idea of the layout of the site and any structures or burials lying beneath the soil.