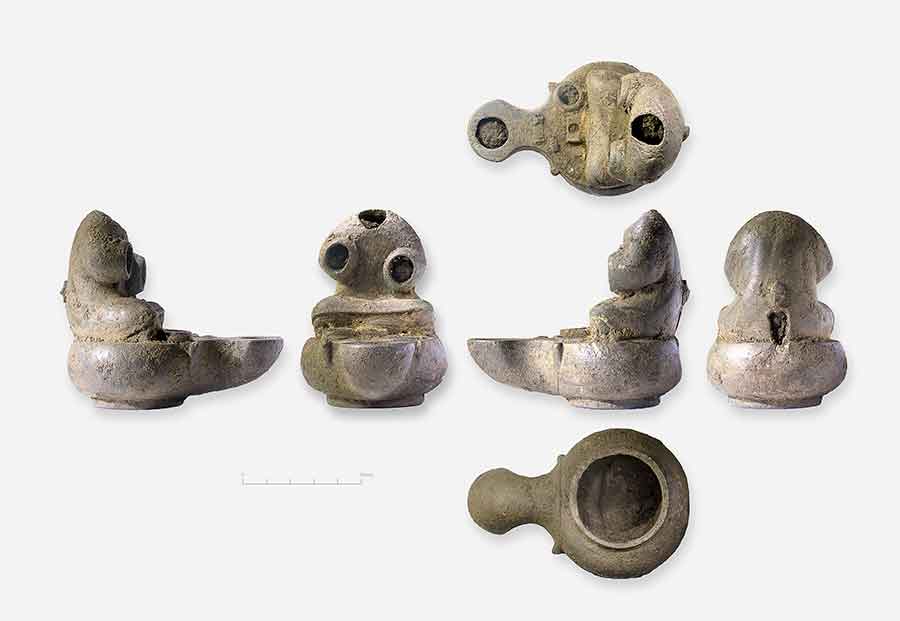 A recent website story described the recent discovery of a Roman villa and associated features at Stoke Gifford, South Gloucestershire. The most intriguing artefact recovered from the site is a highly unusual bronze lamp, which has been carefully examined by Anthony Beeson.

The lamp is clearly the most significant artefact recovered during the archaeological fieldwork and the form and subject appear, at present, to be unique. Several specialists have provided commentary on the find and no doubt the interpretation will develop as the post-excavation works proceed.

Found during the original stripping of the site, it probably had found its way into a ditch at some time long after its manufacture in the 1st century AD. The bronze has a high lead content and so has a silvery appearance. It is quite well preserved although has suffered losses to the figure. Cast in one piece, its complex and hollow form makes it an extraordinary example of bronze-smithing. It is now missing its separately moulded and attached base together with the hands and head of the subject who wears a tunic and is shown sitting cross-legged.

Some have suggested that the hands may have been interchangeable attachments. The hands were placed at different levels as may be seen when viewed from the front. It is almost certainly an imported piece and may originate from the southern Mediterranean area, most likely from one of the specialist centres of lamp manufacture in the area of Naples, Corinth, or Alexandria. It appears to have been a hanging lamp, possibly one of several suspended from a candelabrum stand. One chain loop survives and another has been lost from behind the figure and possibly before it.

Several specialists have been approached as to the identity of the individual portrayed. The cross-legged pose of the figure and its wearing of a long-sleeved tunic has led to the interesting suggestion that the figure represents a Buddha. There was certainly contact between the Roman world and India at this period, although there are no known examples of Roman-made artefacts with Buddhist imagery and one wonders if the average affluent citizen would have been able to identify the subject.

The suggested Alexandrian provenance might perhaps indicate an Egyptian subject which might include the popular Bes. The excavators’ favoured interpretation was that the figure represents Silenus, the obese and drunken companion of Dionysus/Bacchus and part of the god’s retinue. Silenus was a popular figure in Roman art and a number of bronze lamps are known which incorporate him into the design, including an example from London. They often show him seated upon a wine skin (that forms the body of the lamp) or trying to drink from a bowl that is moulded from the lamp’s oil-hole. Typically he is shown nude, and often appears much older as Papposilenus, a corpulent bearded and balding figure. Silenus can be shown with the attributes of a wine cup, wine-skin or playing the lyre – and it has been suggested that the possibly interchangeable hands on this example featured such accessories.

The lamp is an exciting discovery. As an iconographer, my personal opinion of the figure is that I do not think that it can be equated with Silenus as neither the pose, nor the tunic favour the interpretation. Silenus is pot-bellied, generally mostly nude and this figure is not. Even given that the head was cast separately, there seems insufficient space for the beard of Silenus to fit into the space available between the shoulders and this area of the tunic shows no signs of soldering. The figure wears a voluminous and unbelted tunic but, when viewed from the side, is not corpulent. The same points also would rule out the fat and generally naked Bes as well. It actually gives me the impression that it is a young person. If it is from Alexandria then I would suggest that it is rather a genre figure from everyday life, as Alexandrian art adapted animals, children, slaves, street sellers etc as ornaments. The figure sits cross- legged in the traditional manner of an Egyptian scribe or musician, so again he could be either but perhaps the most likely interpretation is that the figure is reading a scroll by the light of the lamp (although writing a scroll is still a possibility).

Given the suggestion that the missing limbs may have been interchangeable it will be interesting if any signs of soldering the hands and head firmly in place survive. Possibly these might have been in some different material such as ivory, but I suspect they were much more likely to have been in bronze or another metal. Something must have been attached to the rectangular mount with a hole in front of him. One might expect hanging chains to be attached to the loop behind the spout and to the missing loop behind the figure, but often there is a third attached in the middle about there. Alternatively there may have been an object associated with the figure attached here.  Whatever the interpretation the lamp is a really important find.