CIfA held its Annual General Meeting on Friday 27 October, and this message is intended to be a short update for on the outcomes of the discussion and commitments made at the meeting.

At the AGM, the members of the Chartered Institute passed a resolution on continuing work to develop framework proposals for individual Chartered Archaeologist status: That the Board of Directors is instructed to proceed with the drafting of an amendment to the by-law and supporting regulations, in line with the structural framework described in the circulated paper ‘Proposal for the assessment of a Chartered Archaeologist grade of membership v4’, to consult on the detail of the regulations and, if the response is favourable, to bring the amendment for consideration by the membership [of CIfA] at a future General Meeting.

The background papers and details of the framework can found  here.

Substantive plans for consultation on the Chartered Archaeologists proposals and on greater participation in decision making will be published in due course and discussions are already underway on these issues.

Moving forward, the Chartered Institute will continue to consult on the reasons for its preferred criteria for Chartered Archaeologist status and reflect on alternative models, will explore with the membership concerns about those criteria, and will develop a detailed framework for formal consideration by the membership.

Moving from framework to Detailed proposals

As was stated when originally introducing the motion to approve further detailed evaluation of the Chartered Archaeologist, the current proposal is a ‘framework’ which sets out some broad principles about awarding individuals Chartered Archaeologist status. As such, it was highlighted that this now gives all the membership the opportunity to have a constructive debate about how this could – and should – work in practice, so that CIfA’s Advisory Council, staff and Board can develop the detail that will make it the best possible solution for our move to become a chartered profession.

In advance of the meeting, and via a petition presented to it, over 70 CIfA members expressed concern about the absence of opportunity for those unable to attend the AGM to vote on the proposals, and although (as shown by the BAJR Facebook poll see below) they were overwhelmingly in favour of the concept of Chartered Archaeologists, they were right to point out the issues where voting was constrained to such a small sector of the whole membership. 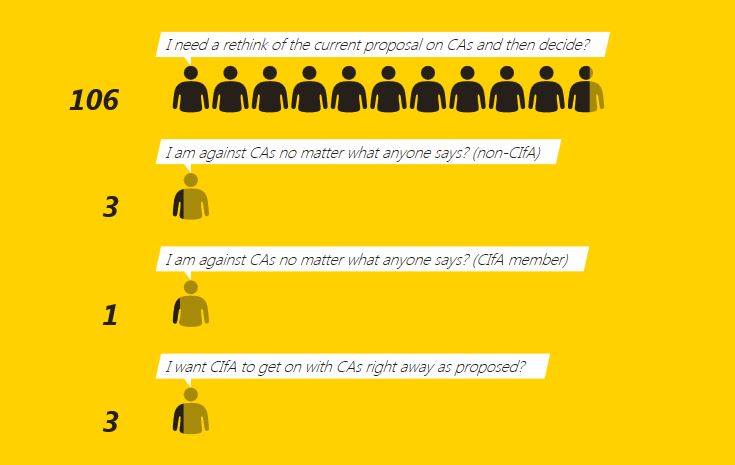 These concerns had been understood by the Board of Directors and the Board provided a statement that it would review voting procedures, consult the membership on options for change, and implement the results of this consultation before any future general meetings. A motion to defer the vote on the Chartered Archaeologist proposals was narrowly defeated but following this, the Board reiterated the commitment

• to contact the petitioners about options for greater participation in decision making, and to implement the results of a review the voting system, including options for the use of proxies
• to maintain an inclusive programme of consultation on the developing framework for
Chartered Archaeologist
• to encourage members to engage with future consultation events and surveys in greater numbers than to date

CIfA would like to thank all those who attended and participated in the debate, and those who provided comments and concerns via other means, including via the petition which accompanied the deferral motion.

The BAJR Discussions and Debate were instrumental in bringing this to a greater audience, ensuring transparency and accountability could be seen and represents a major landmark in creating the profession we all seek.