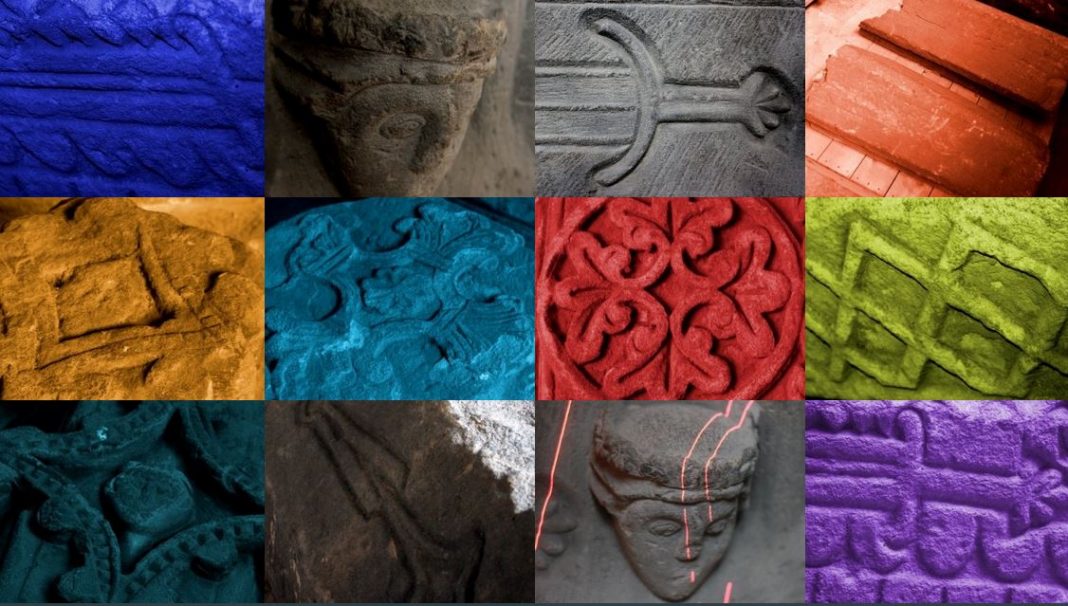 Share on Facebook
Tweet on Twitter
Located on the north bank of the River Tay, Dundee has long been an attractive site for human habitation. Dundee was granted Royal Burgh status in the 12th century by King William I ‘The Lion’.
The grave slabs featured here were most likely placed over elite burials inside St Mary’s Church, founded in around 1198 and burned and rebuilt several times over the centuries. Only the tower known as the Old Steeple and nave
survived a catastrophic fire in 1841. . The stones featured here probably represent only a small proportion of the original number.

3D laser scanning is a technique that is increasingly widely used in archaeology and conservation studies. Using laser reflectance to plot millions of measurements in 3D coordinates, laser scanners allow the production of digital models of objects that can be manipulated and displayed in a wide number of ways.

Often, stripping the colour away from a 3D object that would ordinarily be recorded by a standard photograph allows detailed features to be highlighted, while digital models can be rotated and lit from any angle to allow fine features to be accentuated. This technique is similar to the ‘raking light’ sometimes used by photographers to show details on carved stones, but has the advantage that lighting can be applied from any angle, or multiple angles simultaneously, with the digital object itself positioned in the most suitable way. As such, laser scanning is often seen as the best way to record and depict objects that are difficult to move, or access.

Laser scanners come in a a huge variety of forms, and each has strengths as weaknesses. Some laser scanners are designed for recording buildings and landscapes, and have a range of hundreds of metres, but the scanners used to record the Dundee medieval stones are designed to provide measurements at the sub-mm resolution, allowing every groove and scratch on the stones to be recorded.

3D data from laser scanners is big! Many hundreds of millions of measurements will be required to produce the 3D models of the stones, and it requires powerful computers to process the data.

You can see the paper on the project delivered by Christina and Graeme at Archaeological Research in Progress below:

Download a copy of our booklet on the stones! Click on the image below to download a PDF version of a guide to the carved stones.

*Please note that Firefox’s built-in PDF viewer may affect the appearance of this leaflet – if you have problems, please try another internet browser or save the leafet and view in Adobe Reader.

This project is made possible by funding from the Heritage Lottery Fund. The project is managed by McManus Museum and Gallery and AOC Archaeology Group.