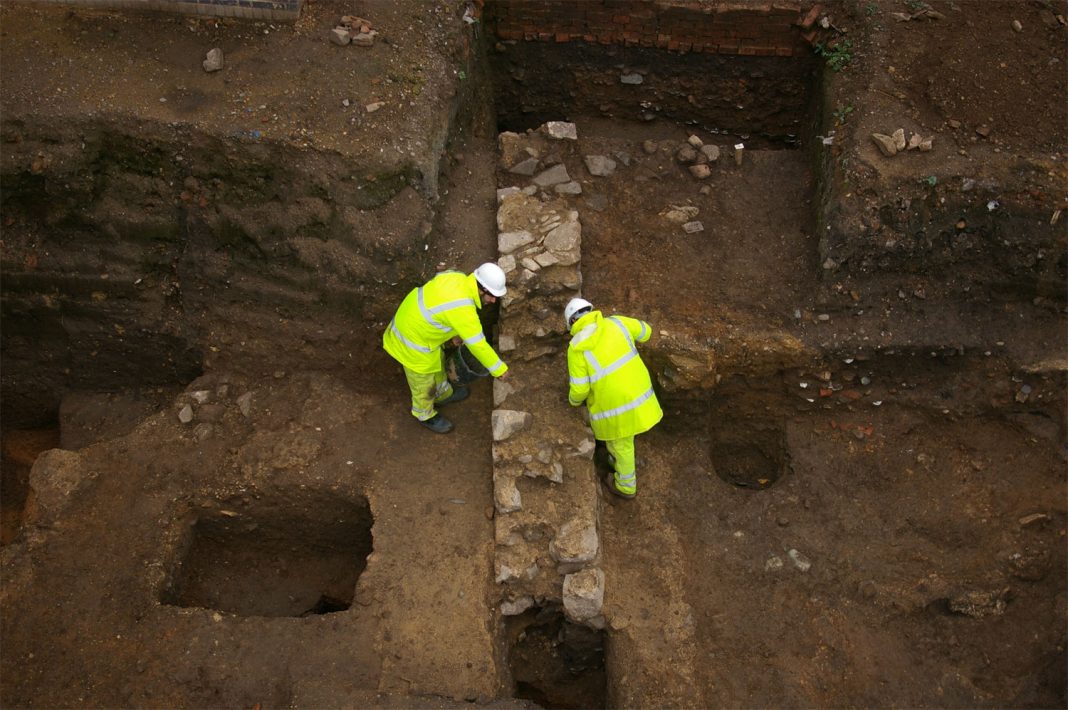 Friar’s Mill, a disused mill complex on the banks of the River Soar, is currently undergoing a £6.3milllion redevelopment scheme to bring it back into use as a base for local businesses. The city council-led project will provide new space for small to medium sized businesses in the restored historic buildings and in new construction on the site.

The site includes Leicester’s oldest surviving factory building – the former Donisthorpe & Company factory – which was badly damaged by fire in 2012. The Grade II listed building dates to the period 1794-1820 and is believed to have been a wool-spinning mill. From the 1820s, this area of Leicester was the centre of a thriving worsted spinning industry and the processes housed in the early mill buildings would have included wool preparation (carding and combing) and spinning, the final product being prepared for framework knitting. Along with the renovation of the original factory building, a row of early 19th century workers’ cottages facing onto Bath Lane and the ‘Pump House’, a mid-late 19th century steam-engine house, are also being restored.

As part of the ongoing redevelopment of the site, archaeologists have been excavating a series of trial trenches in the locations of new buildings. One trench, on the Bath Lane frontage, has uncovered well-preserved remains of a Roman building just 70cm below present ground level.

The shallow depth and significant preservation of the archaeology in this part of the site has led to a larger area being excavated for more detailed investigation. A complex sequence of Roman layers has been revealed including part of a Roman building. Two partially demolished walls and mortar floor surfaces survive in-situ buried beneath a finds-rich layer of demolition debris containing pottery, roofing tile, tesserae and painted wall plaster.

Several courses of superstructure of a north-south wall inside the building survive, together with an associated mortar floor in a room on its eastern side. At the wall’s northern end it joins a more substantial east-west orientated wall running across the centre of the excavation area. Masonry survived in this wall too and it appears to mark the northern extent of the building.

Although some tesserae and fragments of painted wall plaster have been found on the site, the overall impression seems to be of a large utilitarian structure situated close to the river edge, presumably tucked in adjacent to the rampart of the western town defences.

As part of the redevelopment of the site, damage to the archaeology has been successfully reduced by the design of an augured pile formation which will damage less than 3% of the footprint of the new building, leaving the Roman building preserved beneath it.

As to function, however, we presently have little idea but it is surely significant that the building lies very close to a substantial aisled public building excavated by Wardell Armstrong Archaeology on the eastern side of Bath Lane in 2014 and not far north of a possible Roman baths building excavated by ULAS at the former Merlin Dye Works factory site in 2007.