The project, which is led by Paul Frodsham, the Partnership’s Historic Environment Officer, began after the archaeologist was alerted to a large number of stones sticking out of eroding peat at Natural England’s Moor House Upper Teesdale National Nature Reserve.

Paul, who arranged the dig alongside fellow archaeologist Rob Young, said: “It was very lucky we were alerted to the stones, which we refer to as lithics, before they disappeared and we lost an important piece of the past.”

In total, about 1,500 pieces were found at the dig, which took part earlier this month at a remote location in Upper Teesdale. The finds range from finished artefacts and blades through to debitage, which are waste flakes left from production.

The Altogether Archaeology project is drawing to a close after a rewarding five years and if Paul’s theory is proved right, this site could be the earliest one ever excavated in the North Pennines.

The project is funded by the Heritage Lottery Fund and Northumbrian Water stepped in to help finance this particular excavation. This extra support was provided by the company’s Conservation Team which regularly commission archaeological screening for works.

Stuart Pudney, Conservation and Land Manager for Northumbrian Water, said: “When Paul first contacted me about this find I was really excited and more than happy to support an archaeological dig in the area. Working with archaeologists is a regular occurrence for my team as we deal with over six hundred projects a year that range from repairing pipes around Hadrian’s Wall World Heritage Site to working around listed buildings.”

Paul said: “The finds date back to the Mesolithic period, which is the earliest period for which we have evidence for people in the North Pennines. Most of the pieces are very small and include chert, which is a locally found stone, and flint that has probably come from Yorkshire.”

It is thought that the site was possibly a hunting camp, occupied for a few days each year by bands of hunter gatherers and dates from about 7,000BC, some three or four millennia before the introduction of the farming. The site may lie on a route between Yorkshire and Cumbria. While camping here the people may have taken advantage of seasonal resources such as fish in the river, berries or nuts, wild cattle or deer. They made use of chert – a local stone – as well as working flint that they must have brought with them as none occurs naturally in the local landscape.

Heather McCarty of Natural England said: “We were delighted when Paul informed us of the initial finds and very pleased at the way in which the partners and the volunteers in particular, have all worked together to enable this important dig to go ahead in a short timescale. The dig has greatly increasing our knowledge of the history of the area and tells us a lot more about the early human occupation in Upper Teesdale”.

Samples of birch and pine tree were recovered from the base of the peat nearby, which suggests the site was a partially-wooded landscape.

Since the dig, a replica arrow has been made showing exactly how they would have been used.  “People would not really notice these lithics. They were nothing other than bits of stone,” said Mr Frodsham.
“They were used for arrow heads and harpoons but also in other ways such as blades for cutting.” He added: “The finds date back to the Mesolithic period, which is the earliest period for which we have evidence for people in the North Pennines.” 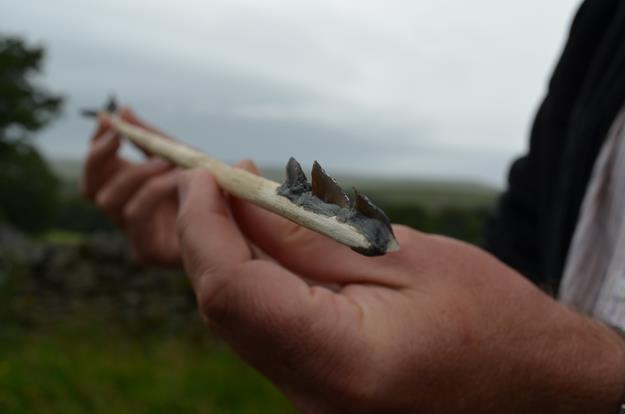 Paul said: “It’s been one of strengths of the Altogether Archaeology that our partners are very generous, with both access to land and funding. Without help on both these counts we wouldn’t be able to carry out these excavations and make these fascinating and incredibly important discoveries that tell us the history of the North Pennines.

“As well as the finds, which are now carefully catalogued and dated, we also took some samples that will be radiocarbon dated and hopefully tell us about the site’s changing environment, both during and after its occupation.

“Unfortunately no structures, like houses or wigwams were found, but it was very interesting nonetheless. And it gives us an insight into what life was like in Upper Teesdale and for the first people who lived here after the end of the Ice Age, perhaps 300 generations ago.”

A full report will be published in due course. For more information on Altogether Archaeology visit www.northpennines.org.uk

Pitlochry Sunnybrae Cottage report: Dissemination – but not as you...

Archaeology has taken a grip on Bulford St Leonards school