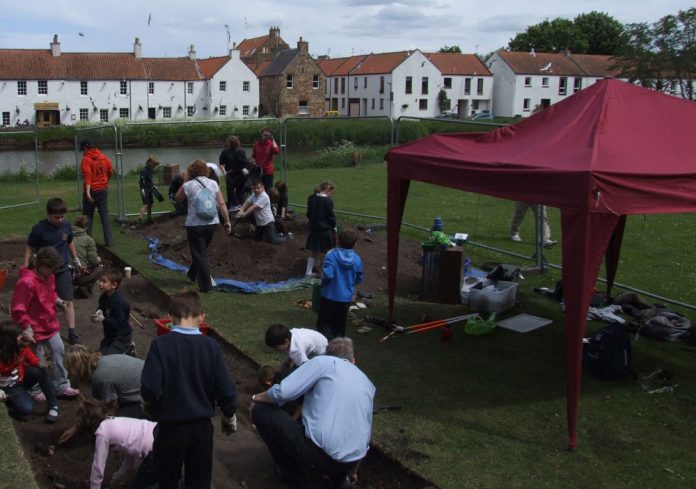 Taking part in heritage is good for our happiness and wellbeing, according to this year’s Heritage Counts report published yesterday by English Heritage on behalf of England’s leading heritage organisations, the Historic Environment Forum. Heritage Counts 2014 proves the vital role heritage plays in our national life by measuring its value and impact on individuals and communities.

Launched yesterday (12 November), Heritage Counts 2014 reveals visiting different types of historic places has a positive impact on life satisfaction, or general wellbeing. A study commissioned for this year’s report measured the value of visiting eight different types of heritage over the past year, from historic towns, to industrial sites, places of worship and archaeological sites. The good effect on wellbeing was found to be the same or more than doing other activities, including sports, and visiting historic towns and buildings has the greatest impact. The monetary value of this positive impact on general wellbeing is calculated as £1,646 per person per year for the average heritage goer.

Sir Laurie Magnus, the Chairman of English Heritage said: “England’s historic environment is a great force for good. It enhances the quality of our surroundings, provides employment, helps underpin our national identity and generally lifts our spirits. This year’s Heritage Counts provides critical evidence to show the contribution that the historic environment makes towards turning the government’s objective of improving the nation’s wellbeing into reality.”

John Sell, Chair of the Historic Environment Forum said: “It is no surprise that heritage significantly contributes to tourism but it is fascinating to be able to demonstrate that it also improves our well-being. Historic places belong to all of us and when people from all walks of life volunteer to look after them or campaign to protect them, it is clear that our heritage plays a unique role in our national life.”

Countless individuals also benefit mentally and physically through active participation in heritage projects. The Heritage Lottery Fund (HLF) surveyed the impact of volunteering in its funded projects over three years: volunteers reported levels of mental health and wellbeing far higher than the general population, with one in three describing a notable increase in self-esteem. The research also found volunteers gained new and improved skills through projects and used them beyond the workplace to engage with their community: 75% of volunteers reported a strong sense of belonging to their immediate neighbourhood. 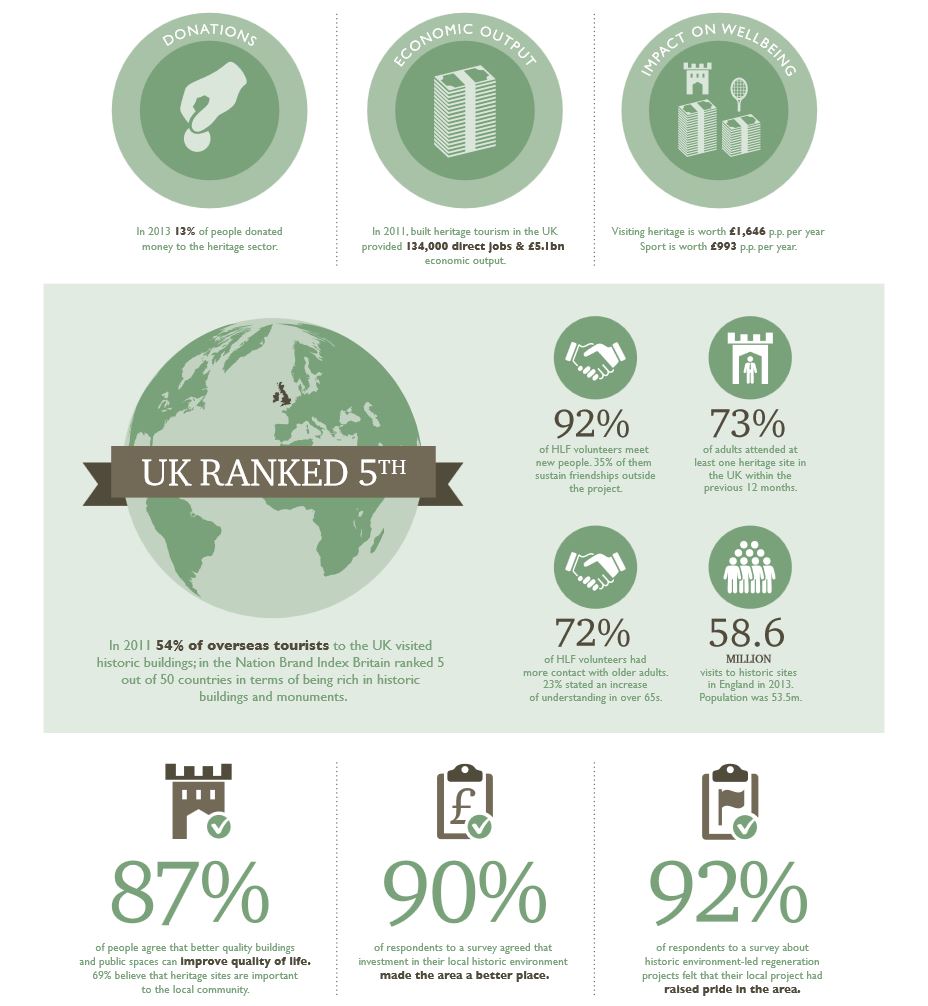 This year’s Heritage Counts report, written with support from the Design Council, demonstrates that the positive impact of heritage on individuals’ wellbeing, learning and identity can translate into benefits for communities. Participating in heritage projects helps people to learn about their local history, make connections and form friendships: a third of HLF volunteers sustained these friendships beyond the project. Research by the Commission for Architecture and the Built Environment (CABE) shows people across all ages favour older buildings over new, saying they convey a sense of longevity and grandeur, so heritage encourages people to feel positive about their local area and increases a sense of civic pride. A survey of residents in areas where heritage projects had been completed found 92% of those questioned said it raised pride in the local area.

Examples of heritage projects with a positive impact on individuals and communities:

Heritage Counts 2014 also explores the impact of heritage on the economy. England’s heritage is a key driver of overseas tourism: according to research conducted by VisitBritain, Britain ranked five out of 50 countries in terms of being rich in historic places and 35% of all overseas tourists in 2011 visited various types of heritage. VisitBritain’s research also found the economic output of heritage tourism, including visits to natural heritage such as parks and gardens, was £26.4bn in 2011. This is a higher contribution than the advertising, car manufacturing and film industries.