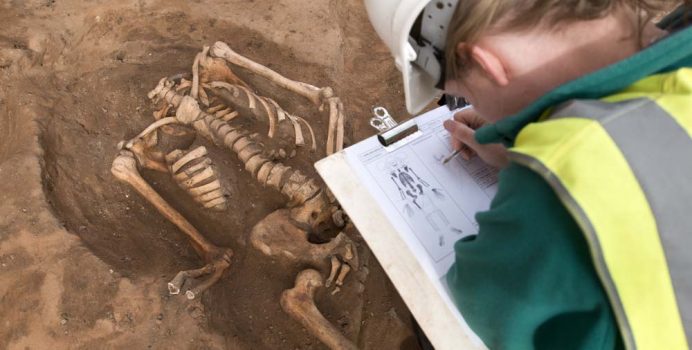 The current redevelopment of the former Newington Hotel by The Helmsely Group Limited provided York Archaeological Trust the opportunity to explore and study an important area of York’s Roman past.

Roman burials have been uncovered by construction work in this area of York since at least the 19th century, something unsurprising given the area’s association with a major communication route.

Located on Knavesmire Road in York, approximately 200 yards from where YAT uncovered the Headless Roman skeletons of Driffield Terrace, the site is part of a Roman cemetery that was first exposed during excavations undertaken by L.P. Wenham on the neighbouring Trentholme Drive in the 1950s – one of the first Romano-British burial grounds to be fully published in this country.

After three months on site, some 75 graves were recorded by YAT. The graves were, for the most part, strikingly shallow – something that Wenham had also noted while digging next door – meaning that many of them had been damaged by ploughing throughout the medieval period and 19th-century construction.

From the surviving graves, however, we can begin to build a detailed picture of how the cemetery may have looked. At first glance, the image is decidedly chaotic: rather than lying in regimented rows the graves crowd together, oriented towards all points of the compass and frequently intercutting.

As for who was buried there, this was a demographically diverse cemetery, populated by both men and women, and individuals of all ages from infants to elderly adults – although they seem to have been broadly of the same social class.

Nor was there anything immediately spectacular about the objects that accompanied these everyday individuals to the grave – only two contained any items of personal adornment. One grave yielded a jet pin, while another individual had been interred wearing some kind of copper alloy head ornament whose flaky, corroded remains had left a green stain on their forehead. Otherwise, grave goods were limited to pots, which were found interred with young and old alike.

War of the Roses cannonball confirmed from the Battle of Northampton