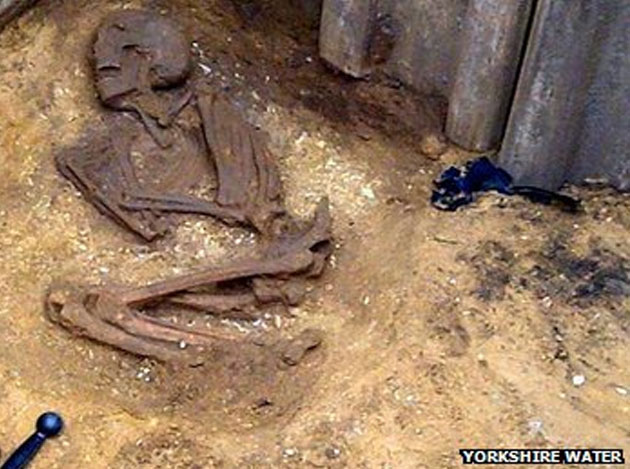 An ancient skeleton has been uncovered during sewer improvement works in the village of Norton, East Yorkshire. Yorkshire Water has been working in the Sutton Street installing new sewers under the road to reduce the chance of flooding to local properties.

When excavating one of the trenches the team discovered a remarkably intact skeleton around two metres below the road surface. Chris Pole, project officer for Northern Archaeological Associates Ltd (NAA), which excavated the finds and are now preserving them said: “We were monitoring the excavation after research showed that the area used to be the site of a Roman cemetery, with a number of burials uncovered during the construction of St Peter’s Church in the late 19th century. “The Roman cemetery was located alongside Langton Road, which roughly follows the line of a Roman road leading south-eastwards from the fort at Malton and the settlement of Derventio (Norton).

Burials could not be placed within the limits of a town in the Roman period, as this was regarded as unclean. “The skeleton was laid in a grave in a crouched or foetal position, possibly mirroring birth. While it was located within the limits of a Roman cemetery, it has similarities with burials of prehistoric date. No grave goods were placed with the burial. “The skeleton has been removed in order to protect it from damage from the installation of the sewer pipe, and will be taken our offices in Barnard Castle for further analysis. The remains will be examined by a specialist to establish the sex of the individual and their age at death, as well as whether they had any injuries or illnesses”

The NAA team were on site with Yorkshire Water’s contractors, Mott Macdonald Bentley, from the start of the project to install a new 60 metre long sewer. Soon after they became aware of the significance of the find, the team from Yorkshire Water and their contractors Mott MacDonald Bentley invited students from a local college to come and see first-hand. Phil Loftus,

Headteacher from Norton College comments: “As soon as we heard about the find we brought a group of history students down to the site. It was just fantastic for them to be able to see the skeleton and we’d like to extend our thanks to Yorkshire Water, their contractors and the archaeologists for taking the time out of their day. “The archaeologist was extremely knowledgeable and it brought home to the students the fact that there’s so much history right beneath their feet. It really was a powerful moment” Yorkshire Water is investing at Norton to reduce the chance of future sewer flooding, by installing new sewers and an underground pumping station. The project started in October and is due to finish in Spring 2014