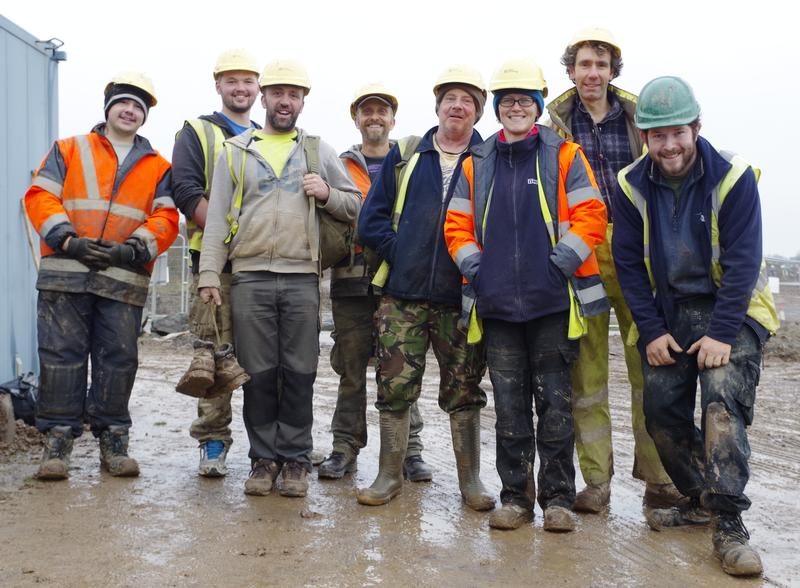 We have been working on and off at Sherford since early 2015, but this year has been a little different. A team from Wessex Archaeology has been present on the site from 4 January to 14 December 2016. A whole calendar year of excavation and investigation in a beautiful spot in Devon. And what a year it has been for the archaeology!

Throughout the year the team, which has normally consisted of around eight archaeologists, has been ably led by Senior Project Officer Matt Kendall. Several of the team have been on site for the entire year which is a feat in itself. The result was a close knit team working at capacity for the duration of the fieldwork, learning the intricacies of the archaeology and natural geology and building some wonderful camaraderie in the process.

The field team has been assisted by a dedicated post-excavation team of specialists back at our main office in Salisbury. Their role is to begin to process the artefacts and environmental samples which were recovered on site. It is here we can begin to fully understand the excavation by dating the pottery, reconstruct some of the vessels and analyse and assess the evidence further.

Throughout the year the team have worked on six excavation areas which were identified following the completion of a site wide geophysical survey. Some of the areas allowed for the rare opportunity to excavate two extant Bronze Age round barrows which were still visible in the landscape. It was a privilege to excavate the monuments and they didn’t disappoint. Both contained central cremation burials of a single individual, both of whom must have been extremely important within their communities. The excavation of the barrows is already providing unique evidence for Devon and will no doubt create more headlines once the analysis and radiocarbon dating is undertaken.

We have been able to identify a large amount of funerary activity in the immediate vicinity of the barrows, including a cremation cemetery consisting of around 15 upturned pottery urns containing cremated remains. Such a collection of urns is very rare for this part of the country, so these burials provide an important opportunity to learn how our ancestors here treated their dead several millennia ago.

One of the excavation areas also revealed a Romano-British settlement of a size that could have supported a small group of people farming the surrounding landscape. The discovery is very exciting and once all of the evidence has been analysed and assessed, we may be able to say much more about the people who lived here, farming and trading across the western boundary of the Roman Empire. Maybe our excavations will even lead to a redrawing of that boundary.

Open day
This year also saw our second open day which was well attended and well received. Visitors were able to see the remains of one of the round barrows under excavation as well as see some of the artefacts we have found during the excavations so far. It was a great day and we would like to thank all those who made it such a success.
More to come

Excavations are set to continue into 2017 as the development makes progress. We will continue to provide a team of archaeologists on site to be on hand to monitor all aspects of the development so that we can continue to learn more about this exciting historical landscape. Matt will continue reporting throughout the winter and we will begin to tease out information and the secrets which the site has. Towards the end of the year we made some truly spectacular discoveries which we will release information about as and when we can. Watch this space!

Archaeologists unearth the bones of at least 20 French First World...

The Mystery of Walter Mierzwa