Home General News York amphitheatre could be under King’s Manor 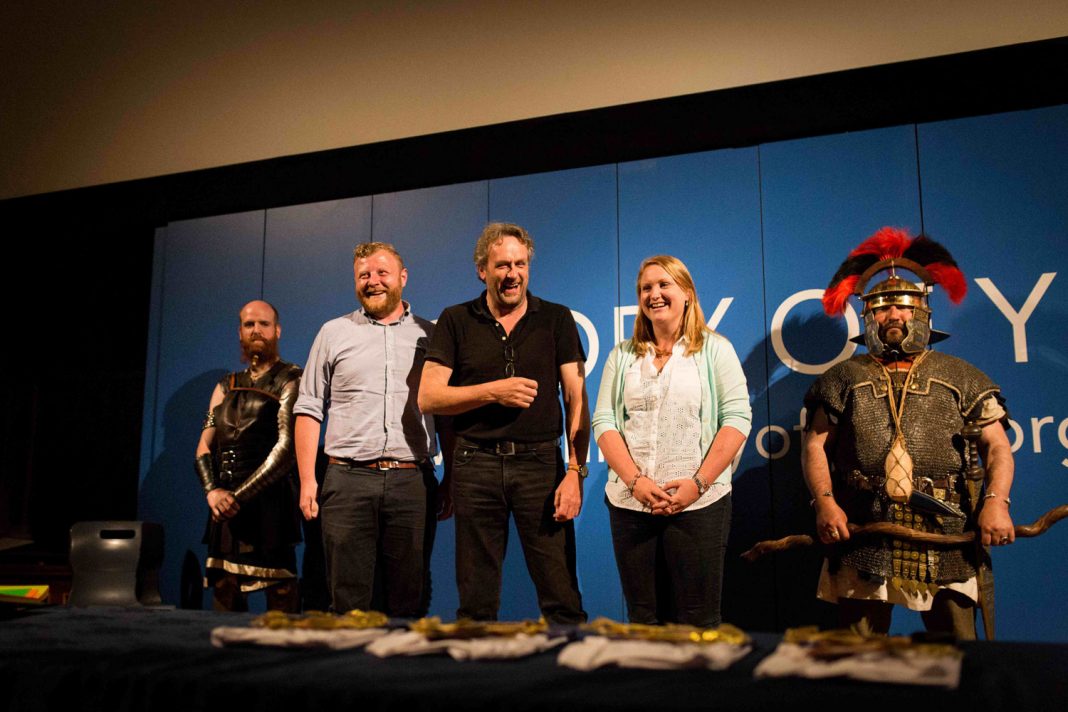 Six teams entered the event at the Yorkshire Museum on Thursday 9 June to argue their case to an audience of nearly 175, as to where gladiators may have fought and the emperor addressed the legions.

Six teams battle it out

A highlight was the youngest participants, pupils from Years 3 and 4 from St Wilfrid’s RC Primary School, starting the event with a film of the class singing about where the amphitheatre might be. Four costumed class members then presented their argument on stage in Roman costume with jokes and more song to explain why they thought the site could be under York St John University.

Wheldrake School, The Mount School, and Queen Margaret’s School all gave beautifully-prepared and presented arguments about where they thought the amphitheatre will be found.

After the schools had all made compelling and entertaining presentations, York Archaeological Trust and King Archaeologists gave two very different views on and how one would set about finding it.

Over to the archaeologists

The team of three King Archaeologists argued that the amphitheatre will be found on a site extending under the King’s Manor, York Art Gallery and the gallery garden. They suggested that rather than look for a structure, a depression should be identified and it appears that a large one exists on the King’s Manor site. They showed an architectural elevation that indicates the King’s Manor, currently home to the University of York’s Archaeology, Medieval Studies and Eighteenth Century Studies departments, is positioned above a large depression. Originally the Abbot’s House of St Mary’s Abbey, the King’s Manor served as Tudor and Stuart seats of government, becoming residences in the 18th century and a school in the 19th.

The audience then voted who it thought had presented the best argument. With a costumed gladiator and centurion in attendance, compere Graham Harris, chair of the Eboracum Roman Festival, announced the winners as King Archaeologists.

“Having had a spectacular X Factor-style event last night with amazing presentations and drama, the next step is the Time Team element of the project when the King Archaeologists will have their idea tested on the ground. Being an inclusive project, we’ll set up a working group with representatives from each team, the York Museum Trust, Historic England and the University of York. The intention is to run a fieldwork project in Spring 2017 and have a report back session – hopefully as part of the York Festival of Ideas 2017.”

“This fantastic event is proving a very worthwhile collaboration between the council, York Museum’s Trust, AOC Archaeology Group and the York Festival of Ideas, with funding from the Holbeck Trust. Feedback from the audience showed that over two thirds of respondents felt that their knowledge of the subject had increased significantly.

Tim Sutherland, Lecturer in Battlefield Archaeology and King Archaeologist team captain, said: “We’re a bit embarrassed to win as the kids were fantastic and we only beat St Wilfrid’s by a couple of votes! But we had a great time at the event and are looking forward to working with everyone to explore our idea and take the project forward.”

An exhibition of posters sent in by children and adults was also on display in the Yorkshire Museum and were projected onto the big screen before the event and during the interval. The winning posters were submitted by sisters Tilly and Daisy, and by classmates Evie and Emily from Class 3/4A at St Wilfrid’s RC Primary School.

This event is one of 100 free activities offered as part of the University of York’s Festival of Ideas 2016 – http://yorkfestivalofideas.com/2016/ – and comes hot on the heels of the Yorkshire Museum’s Eboracum Roman Festival – http://www.yorkshiremuseum.org.uk.