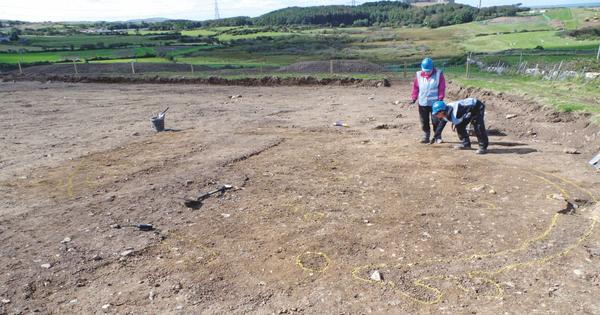 The construction of a new power station on Wylfa Head for Horizon Nuclear Power has afforded Wessex Archaeology the opportunity to explore the rich archaeological landscape of the headland. Several places of interest were identified during a phase of archaeological evaluation in 2015− 2016 and one of these locations was selected to be the focus of a community archaeological excavation. The work was enabled by a partnership between civil engineering companies Jones Brothers and Balfour Beatty.

The community excavation was focused on a large circular monument thought to be the remains of a henge. Henges date to the New Stone Age, or Neolithic period (4000 to 2500 BC), and generally consist of a roughly circular space defined by a ditch usually with an external bank. Henges are considered to be ceremonial monuments that would have been the focus of activity on certain days of the year, particularly the summer and winter equinoxes. As you stand within the monument and look around, it is easy to imagine dispersed farming communities making their way towards the henge along the shallow valleys leading inland and perhaps arriving by boat in the sandy bays to the north.

The excavation volunteers represented a diverse cross-section of the Anglesey community and all were given the opportunity to learn the archaeological process from excavation through to recording their findings.

Secular to Sacred: The Story of the Lacock Cup