Home General News ‘When a find is recorded, it is truly discovered’: metal-detecting and its... 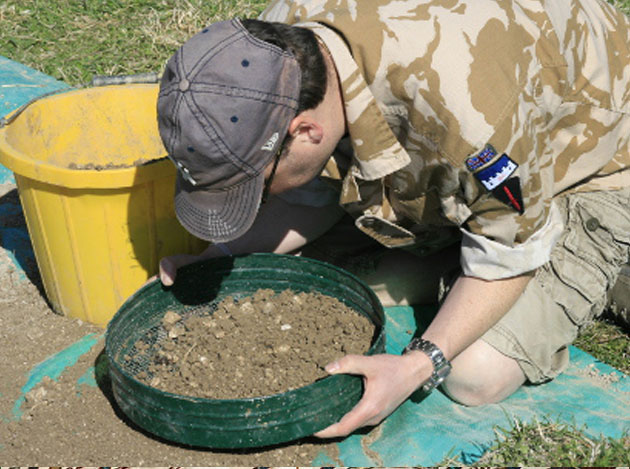 As the second series of Britain’s Secret Treasures broadcasts on ITV in the United Kingdom, it’s been amazing to see the reaction and level of interest. The first series averaged 3.5 million viewers per episode, so we know just how captivating the stories being told are. The fact that all the discoveries featured were, and are, found by ordinary members of the British public – not professional archaeologists – makes this all the more remarkable.

Indeed, many people watching the series have probably found archaeology, albeit not necessarily recognising it as such, be it a bit of pottery from the garden, a coin on the beach, or a piece of worked flint while out walking in the countryside. Individually these objects might not seem important (though clearly some are), but together they help paint a picture of the past, helping archaeologists understand where people lived, and how they worked and played. It is this public contribution to archaeology, through recording their finds with the Portable Antiquities Scheme (PAS) [LINK] that is transforming the archaeological map of Britain.

It is probably fair to say that archaeologists and metal-detectorists have not always seen eye to eye. It wasn’t until the 1970s that metal-detecting started to become popular and the response of many European countries was to ban or restrict such archaeological work by non-professionals. Indeed, this remains the situation in most of Europe, including our closest neighbours, the Republic of Ireland and France, where metal-detecting is prohibited.

However in England and Wales metal-detecting, with the permission of the landowner, was not legislated against; although metal-detecting on sensitive archaeological sites (scheduled monuments) has been prohibited (since 1979) and finds of Treasure – precious metals and groups of coins or base-metal assemblages over 300 years old – must be reported. Nonetheless, heritage legislation in England and Wales (and Scotland) remains quite liberal compared to elsewhere in Europe.

At one time, this was seen as a ‘failure to deal with the problem of metal-detecting’ by concerned archaeologists. By the 1980s the Council for British Archaeology launched the Stop Taking Our Past (STOP) campaign, based on the perception that metal-detectorists were systematically looting archaeological sites by removing objects from ‘stratified archaeological contexts’ (thus destroying important clues about how and why things were buried) to sell on the open market. Indeed, the private ownership of archaeological material, and also the buying and selling of antiquities, remains contentious, and defines relations between archaeologists and the metal-detecting fraternity today.

Nonetheless, most agreed that the attempt to ban metal-detecting was a failure and probably counter-productive. The STOP campaign did little more than entrench views, and frustrate dialogue between the two sides.

Over time it has been understood that most metal-detectorists have a genuine interest in the past, though of course there are a relatively small minority of individuals who metal-detect just for financial gain or have little interest in archaeology. An important observation is that most metal-detectorists search on cultivated land, where objects and coins are generally already dislodged from any archaeological context by agricultural work, such as ploughing. Indeed, it may be argued that recovering these items ensures they are saved from being completely destroyed by agriculture and natural and artificial corrosion processes.

Once disregarded by many archaeologists as of little interest (the plough-zone was often machined off in archaeological excavations of the past) it is apparent this layer holds many objects that can offer clues about any underlying archaeology. Even in their own right, such stray finds are of interest to researchers studying particular object types and their distribution.

This appreciation of the potential contribution that metal-detected finds might have to archaeology led to the establishment of the PAS; set up first as a series of pilot schemes in 1997, and then extended across the whole of England and Wales in 2003. The aim of the project was to liaise with the metal-detecting community, build trust, and encourage finders (on a voluntary basis) to lend their objects for a period of time so they could be recorded. The aim was not to acquire objects for museums, but that said, many finders, realising the importance of their discoveries, have allowed museums to acquire them, or have even donated them.

Before the PAS there was no mechanism to record such finds. Some people may have taken what they had found to their local museum (or even a national museum) for a curator to look at. But only a fraction of these were logged either by the museum or with the local Historic Environment Record. Even fewer were published, such as in a local archaeological journal. For many of these finds their discovery was only brief, as once they were returned to their finders they were probably put away in a box and forgotten, almost certainly without any record of their findspot (of most interest to archaeologists) being recorded. How then might they further archaeology?

Nowadays all the finds recorded with the PAS are logged onto its online database for anyone to look at, study and enjoy. On the public site precise findspot details are protected, to ensure archaeological sites are not damaged by looters, sometimes called nighthawks. However, the full data is made available for archaeological work and research, and is proving to be a major component in many research projects trying to understand the past.

A mount from a medieval coffett, probably enamelled in Limoges, France.

Unless someone spends a reasonable amount of money on a metal-detector (several hundred pounds) they are not likely to find much archaeological material; cheap machines are nothing more than toys, with which you might find some lost change or ring-pulls at the most. Therefore it is a hobby people invest in and become quite serious about. Whatever the initial motivation to take up metal-detecting, most acquire an appreciation for history and want to learn as much as possible about the objects they find. They share the same buzz we archaeologists get about discovery. It is nonetheless important that metal-detectorists take care to avoid sensitive archaeological sites and follow the Code of Practice for Responsible Metal Detecting at all times. This Code also outlines how important it is to get permission (from the landowner) before you search and the necessity of recording finds with the PAS.

Only once a find is recorded is it truly discovered, and through recording finds with the PAS metal-detecting can make a truly positive contribution to archaeology.

10 Years of Thames’ Finds on Display