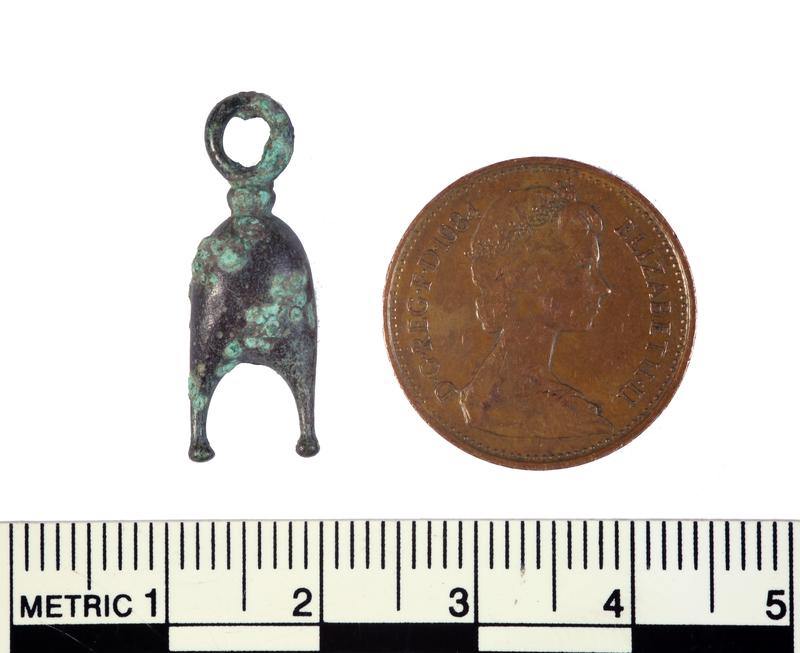 This tiny but enigmatic object was found in late September 2016 during excavations undertaken by Wessex Archaeology working with Operation Nightingale and Breaking Ground Heritage, supported by Defence Infrastructure Organisation.

It came from the base of the Late Bronze Age/Early Iron Age midden at East Chisenbury on the Salisbury Plain Training Area; a site remarkable for the quantity of late prehistoric ‘rubbish’. The surviving mound (approximately 3 m high) was apparently enclosed by a substantial ditch and had many postholes indicating associated structures.

Made of copper alloy and weighing just 3 g, the loop on the object may indicate it was worn as a pendant of some type, while its overall form is, perhaps, in some way reminiscent of a human figure. A 3D photogrammetric model has been created of the object in order to fully appreciate its delicate shape and form. Due to its size of only being just 24 mm high, a macro zoom lens was used to take the required photographs needed for the photogrammetry software.

The object is currently thought to be unique – it has not been claimed by Romanists, and prehistorians have, so far, failed to come up with any parallels. If anyone has seen anything similar we would love to know – a zipper pull has been suggested several times … it isn’t!

By Phil Andrews and Ken Lymer

The rules of Roman horse-racing: news of inscription in Turkey