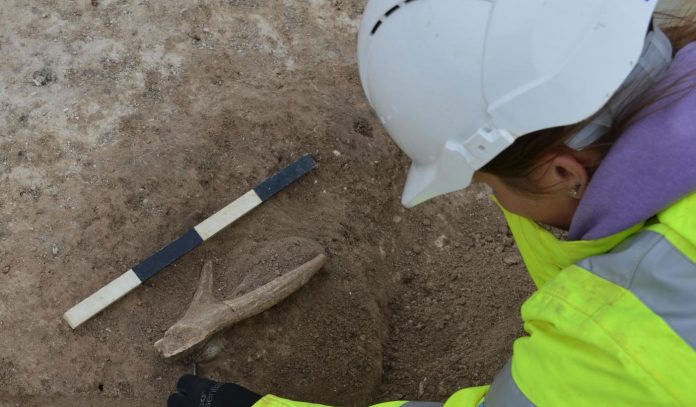 Excavation of a deer antler at Melbourn. Image: OA East

Recent investigations at Melbourn have revealed a surprisingly rich multi-period landscape in Cambridgeshire.

A team from OA East excavated a site at Melbourn in south Cambridgeshire ahead of a building development during the latter half of 2017. Geophysical survey and evaluation trenching had suggested the presence of some sparse and poorly preserved prehistoric features obscured by a medieval or post-medieval ditched road. Further investigation threw up several surprises.

The evaluation had hinted at early land use with the discovery of several glacial hollows containing Mesolithic and early Neolithic finds, but the recent excavation also uncovered a collection of later Neolithic pits. These contained Grooved ware sherds, hundreds of flints, hazelnut shells and a haul of animal bone, including those of aurochs, and most of an antler.

One Bronze Age barrow had been identified but the excavation revealed another double ditched barrow that was truncated by the later ditched road. At the centre of this barrow was a Beaker period burial of an adolescent, crouched on their side holding a flint knife, which survived centimetres from the hollow way forming the road. While no early dating evidence for the road has emerged there were clearly several phases of ditch cutting and realignment and it possibly formed part of the Roman route of Ashwell Street.

Further surprises lay just north of this road. Evaluation trenches through a probable Bronze Age enclosure had avoided all but a handful of a few hundred postholes. Further investigation revealed 10-12 roundhouse-style structures and several post alignments associated with Bronze Age pottery and flint. Project Manager, Richard Mortimer, says that a particularly unusual feature of this enclosure is that it was built from closely spaced timber posts in the late Early Bronze Age and was then replaced with a ditched boundary during the early Middle Bronze Age. When excavating a Bronze Age settlement along the route of Norwich’s new northern bypass in 2016, OA East found a network of fields which was also unusually separated by post hole boundaries rather than ditches.

The excavation hosted a visit from the cubs and brownies of the Cambridge branch of the Polish Scouting and Guiding Association in October 2017, who were working on their Archaeology badge, and an open evening to showcase finds and photographs from the excavation to local residents is planned at Melbourn Village College at the start of next month.