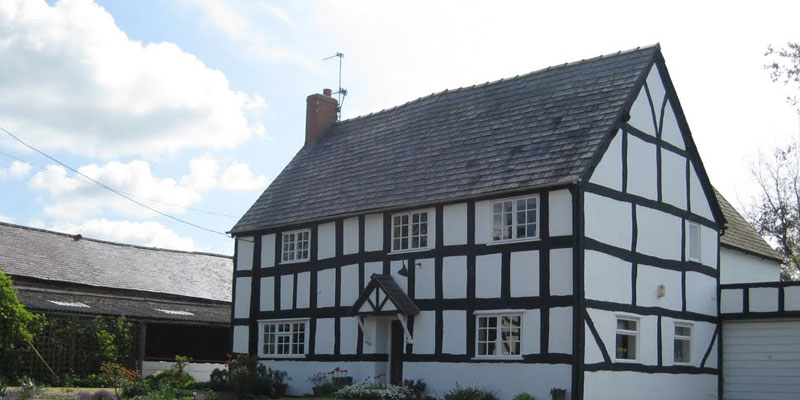 The village heritage team in the small hamlet of Tilley, 1.5km south of Wem, has been awarded £65,500 by the Heritage Lottery Fund for the three year project.

The grant will allow the team to archaeologically survey the village using a variety of methods, with particular focus on the group of timber-framed buildings which are present on an estate map of 1631.  Many of these buildings probably have their origins within the medieval period.

Dr Nash said: “Based on place-name evidence, the village of Tilley probably has its origins during the Early Medieval (Anglo-Saxon) period.  The ‘ley’ element of Tilley translates into ‘leah’, meaning wood clearing.”

The project, one of the largest of its kind, will include a dendrochronology survey of 28 buildings that stand within the Tilley township.  Dendrochronology is the study of dating timbers through calibrated tree-ring growth.  So accurate is this method that dendro-specialists can determine the date of when a tree was felled and also often pinpoint the season.

Noted dendro-specialist, Dr Andy Moir, appointed by the Tilley Timber Project to sample and date the timbers, has found that four of the seven timbers samples from one building –  Brook Farm – have a date range of 161 years, the earliest date being 1419, the latest 1579, with one timber being felled during the winter of 1579/80.  However, the building’s boxed-framed architectural style suggests the timbers should have a much later date.

In addition to the dendro-survey, the project team will also investigate the numerous carpenters’ marks, timber joints and decorative styles, in particular the ornate carving detail on several of the high status building that stand within the township.

Other survey methods to be used for the project include 3D laser scanning, undertaken by Andy Beardsley of Terra Measurement.  This element will provide millimetre-accurate elevation surveys of each building.  The 3D laser scanning survey is supported by a drone survey that will provide a record of the upper sections of the buildings, including the roof sections.  In addition, the project team will apply a geophysical survey to several areas where buildings once stood, undertaken by former University of Bristol students Les Dodds and Phil Dell.

Local school children will also be involved in the project, recording the external features on a number of buildings that are probably at least 350 years old.

Alastair Reid said “This late mediaeval/early post-medieval heritage can now be dated accurately for the first time, producing a unique and valuable reference database for all similar buildings in this part of the West Midlands.  In addition, we hope that this project could ultimately train a core of volunteers and inspire others to undertake similar projects in nearby Wem which contains a wealth of timer-framed buildings.”

Dr Nash added: “The Tilley Timber Project team is extremely grateful for the generous grant that has been awarded by the Heritage Lottery Fund.  The team will ensure that every penny is put to good use.”

Following the fieldwork, Dr Nash and Alastair Reid will collate all the fieldwork data for the production of a village information board as well as several commissioned books.