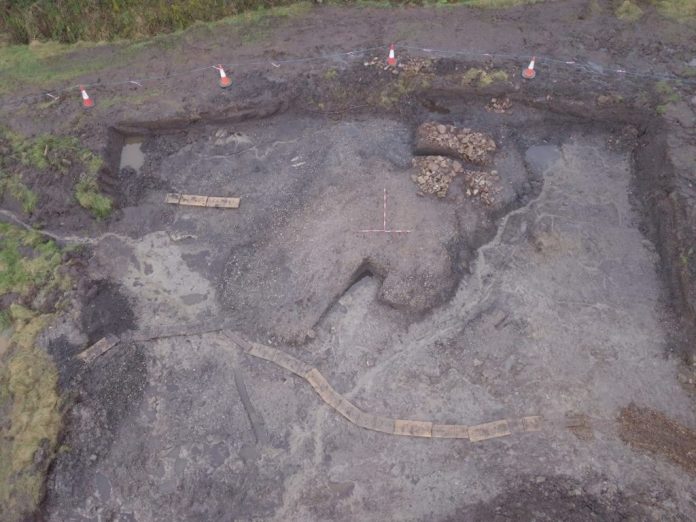 As part of works along the N26 Cloongullaun Bridge Realignment Scheme, Co. Mayo, Rubicon Heritage completed the excavation of a large intact burnt mound with two underlying wood lined troughs and associated features. The works were directed by Bruce Sutton, who led a small experienced team of four archaeologists. All works are managed by Mayo County Council National Roads Office and funded by Transport Infrastructure Ireland. Archaeological works were administered by the Project Archaeologist Richard Gillespie, who also completed the initial test-trenching which identified the site in 2019. Ongoing post-excavation works, based on dating, specialist analyses and research will help further interpret the site.  A series of aerial photographs were taken of the burnt mound site during excavation. Links to the 3D reconstructions compiled from these photographs can be found throughout this article. These can be rotated 360˚ and zoomed in and out. All photographs for 3d images were taken by Bruce Sutton using a DJI Mavic Pro equipped with a 12MP camera.
​
The Mound
A large burnt mound of charcoal and heat shattered stone lay across the excavation area, measuring 11 m northwest-southeast and 9 m northeast-southwest, with a maximum depth of 0.9 m. It lay within a depression in the landscape that had filled naturally with peat, both before site use and after. The resulting peat build-up had sealed the mound, which was only discovered during test-trenching works in 2019. ​ ​Two smaller spreads of burnt material lay to the northeast and southeast, possibly separated from the main mound by a machine cut drain that snaked across the site.

​As is typical with burnt mound sites the mound was divided into quarters (quadrants) and opposing quadrants excavated to give cross sections across the mound layers. This revealed several similar layers of material with a stained red layer located towards the centre, likely the result of mineral (iron) deposition during the build up of water. All mound layers contained abundant charcoal and at least 50% heat-shattered sandstone, often differing only in colour.

Trough 021 & associated features
This large trough feature was orientated east-west, measuring 2.5 m x 1.65 m x 0.4 m deep. It was cut directly into the natural peat and located at the northern edge of the main mound. A layer of sand and moss had been laid down across the base of the feature. This is often interpreted as a filtration layer for water filling the trough, especially when recorded under a timber lining and was first identified as being part of trough construction at Ballyvourney I, Co. Cork (O’Kelly 1954).

Above the moss and sand was a substantial timber lining which consisted of forty-six individual pieces of wood. All wood elements were waterlogged and many were soft to touch, with several being badly degraded, and all displaying damage caused by sphagnum roots. The lining comprised a plank and roundwood base, with plank and roundwood sides and twenty-three pegs; stone was also incorporated into the construction.

​In total there were forty-seven worked ends identified in the timber lining; ten chisel points, nine wedge points, twenty pencil points and eight ends worked but not specified. Four ends were too damaged or degraded to identify if they were worked. All identified facets were relatively flat, suggesting a flat metal axe was used. A small fragment of burnt bone was recovered from fill layers directly above the timber lining.

A series of wooden stakes were hammered into the peat around the eastern end of the trough. Stakeholes external to trough features are a well-documented occurrence on burnt mound sites, often interpreted as forming fence-lines, windbreaks or drying racks (Hawkes 2018, 104). The linear arrangement of several stakes suggests that a temporary structure was located here. A similar stake arrangement at Fauleens II, Co. Mayo was interpreted as supporting a possible covering for the end of the trough (Gillespie & Kerrigan 2010, 117).

A stone path ran from the western end of trough 021, continuing off-site outside the edge of excavation. It is also unusual to see a linear pathway constructed across such sites, which would have provided a stable surface to walk upon. Very few examples of stone pathways associated with burnt mounds have been recorded in Ireland, with only 7 stone examples listed in the recent study by Hawkes (2018, 93). The rough stone path connects trough (021) with an off-site area to the northwest, suggesting people accessed the site from this direction, possibly from a settlement located uphill. A similar example of this was recently recorded at Slievereagh 2, Co. Cork (Sutton 2019), where a path of large stones led to trough and well features from outside the excavated site extent.

Trough 022 & associated features
This smaller sized trough was located along the southern side of the main mound, measuring 1.3 m long, 1 m wide and 0.4 m deep. The trough was finished with a brushwood and roundwood lining and a stone platform (hearth) was located at the eastern end, in a shallower semi-circular cut.

The timber lining consisted of 52 individual wood elements close to the cut edge. All pieces of wood were waterlogged and many were soft to touch. The lining consisted entirely of brushwood and roundwood and included base, four sides and corner pegs. In total there were sixty-one worked ends identified; twenty-six chisel points, twenty-four wedge points, four pencil points and 7 ends worked but not specified. Twenty-nine ends were too damaged or degraded to identify. All identified facets were relatively flat.

At the eastern end of the trough was a stone platform that lay directly over the eastern end timbers. This comprised one large sandstone slab laid flat, with other stones arranged at an angle around this central stone. All stones appeared heat-affected and large charcoal pieces lay between the stones, suggesting this acted as a hearth, with charcoal and heated stones pushed directly into the adjacent trough.

The traditional interpretation of these typically Bronze Age monuments is that they were cooking sites, a view supported by the early texts, folk memory and experimentation, and recent publications also put forward the use of burnt mounds as communal feasting sites (Hawkes 2018). However, their use as cooking sites is an interpretation that fallen in popularity in the last 20 year and other theories about their use have also been put forward. These include bathing, use as sweathouses, brewing of beer, butter production, leather-working, fulling/dyeing, horn antler working, or as multifunctional sites. However, none of the above theories have been definitively proven and any such function cannot be confirmed without more physical evidence. It is most likely that burnt mounds were multifunctional or that different sites were used for specific purposes. Determining a specific use for individual sites is difficult in large part because of the lack of definitive evidence and recovered finds.

As with the vast majority of burnt mound sites across Ireland, with a lack of animal bone, or other artefactual remains to give a clear indication as to its purpose, there is no direct indication at Pollsharvoge 1 to suggest what the site was used for, other than the heating of water. Food refuse is rarely recovered from these site types, but it is unclear if the site conditions would have preserved any food production waste products. The presence of the burnt bone in trough 021 suggests that cooking was being undertaken on-site in a fire, although the level of this is likely limited and possibly as a secondary product of heating stones.

It is hoped that we will be able to have a more defined interpretation of the function of the two trough features once post-excavation analysis has been completed on the worked wood and environmental samples recovered.