Home General News The archaeology of the 1798 Vinegar Hill Battlefield 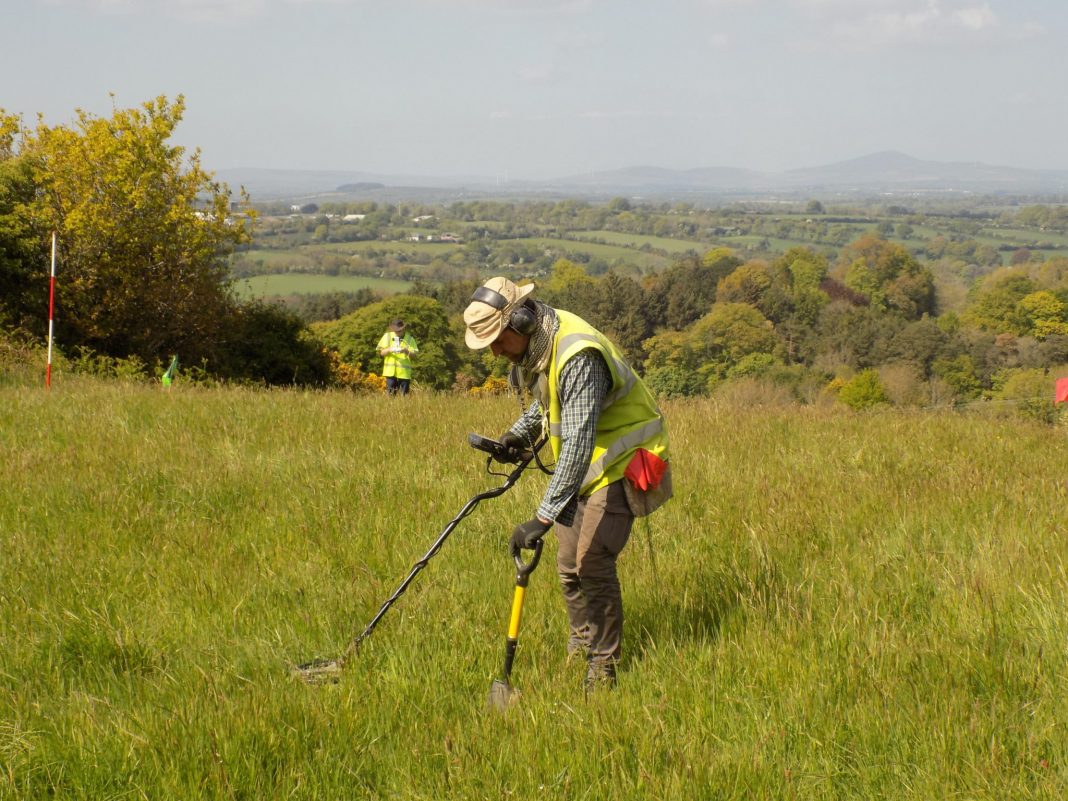 Share on Facebook
Tweet on Twitter
(Above) Battlefield archaeologist Sam Wilson during the licensed survey. Each find was uniquely identified and numbered, and flagged so it could be recorded. As archaeologists we are also careful never to excavate below the topsoil level, to avoid damaging any preserved archaeological levels. Rubicon Heritage

Rubicon Archaeology are currently working in partnership with Earthsound Archaeological Geophysics and Sligo Institute of Technology to finalise the Preliminary Report for the major fieldwork recently carried out on the 1798 Vinegar Hill battlefield. Rubicon’s Damian Shiels was the archaeological director for the licensed battlefield survey, and gives a brief insight into what it has revealed.

He explained how it was “a great privilege” to have an opportunity over the summer of 2017 to carry out fieldwork on the 1798 battlefield of Vinegar Hill. Aside from being the most iconic engagement of the Rebellion, the survey itself also constituted the largest of its kind yet attempted in the Republic of Ireland. Metal detection in the country is illegal unless carried out under license from the State, legislation that is designed to protect the finite archaeological resource. The results garnered during the course of our fieldwork demonstrate the immense importance of conducting metal detection surveys on battlefields within a strict methodological framework, and highlighted the scale of information that can be lost if these type of conflict sites are subjected to illegal detection.

Rubicon had previously been involved with the archaeology of the Vinegar Hill battlefield when they undertook a report on the site as part of the Irish Battlefields Project, in partnership with Eneclann Ltd. This time their efforts form just one element of the large-scale Wexford-County Council funded Longest Day research project, which intends to uncover as much detail as possible about the battlefield in order to inform future management proposals. The team brought to the field for the licensed archaeological survey was a multi-national one, and included archaeologists from Rubicon, Earthsound, Sligo I.T. and Cotswold Archaeology.

The Battle of Vinegar Hill

Vinegar Hill is the most famous battle of the 1798 Rebellion. The action there was the culmination of General Gerard Lake’s Crown invasion of the county that had begun on 18/19 June and which had the main United Irishmen camp on Vinegar Hill as its ultimate target. The fighting took place on 21 June 1798 when a force of 10-15,000 Crown troops attacked the Hill. The United Irishmen encampment is thought to have contained between 20,000 and 30,000 persons, but this figure included women, children and other non-combatants. At around 4am, Lake’s artillery began to bombard the Rebel lines. This was lifted some three hours later, and a general assault began. The Crown troops attacked in three columns under Generals Duff, Dundas and Loftus, advancing on the Hill from multiple directions. At the same time another column under General Johnson was attacking the far side of Enniscorthy town, with the intent of taking the bridge over the River Slaney that linked the town with Vinegar Hill. After some heavy fighting Johnson managed to reach the bridge, but was held back there by the United Irishmen. Meanwhile, as the main attack columns approached the Hill, the defenders launched a number of counter-charges in an effort to break their assault, but ultimately were pushed back. At around 9am the United Irishmen began a retreat, and the summit of Vinegar Hill fell to the Crown troops. A rearguard action combined with the defence of the bridge allowed the main body of United Irishmen to escape from the field. As Dr. John Cronin has noted, estimates of United Irish casualties during the battle vary from between 500 and 1200.

The licensed survey took place over two week-long phases in May and August. Although they uncovered signs of damage that has taken place at the site as a result of both developmental pressures and almost certainly by illegal metal-detection, the most significant finding was evidence for intense combat on 21 June 1798. In fact the archaeological results are the most impressive yet uncovered on a battlefield in the Republic of Ireland.

The majority of this material likely relates to the fighting between United Irishmen and the Crown column led by General Dundas (who was accompanied in the field by General Lake). The methodological approach and scientific recording techniques that the licensed survey employed means that we can identify potential firing lines, with dozens of both fired and unfired bullets providing indications of the approximate areas were troops may have been standing during combat. Many of these bullets show evidence for having been fired at extremely close range. As well as the small projectiles, the survey also produced evidence for the artillery bombardment launched by the Crown artillery to ‘soften-up’ their target, as well as the use of close-artillery support during the fighting itself, in the form of anti-personnel ‘grapeshot.’ Weapon fragments bore testament to the intensity of activity, while various personal objects and non-military items bear testament to the presence of the United Irish encampment.

The licensed survey represents only a small-first step in investigating one portion of this battlefield, but has already shown what archaeological techniques can bring to our understanding of the fighting– as well as indicating what is lost when it is removed illegally. The project is now moving into the detailed analysis phase, and over the coming months much more will be revealed as we begin to further assess and interpret the material. Stay tuned for future project updates. In the meantime, if you would like to see a lecture on the work that was delivered in the midst of the fieldwork, you can watch the video below.

Post-excavation work on the Newark urns

Pitlochry Sunnybrae Cottage report: Dissemination – but not as you...