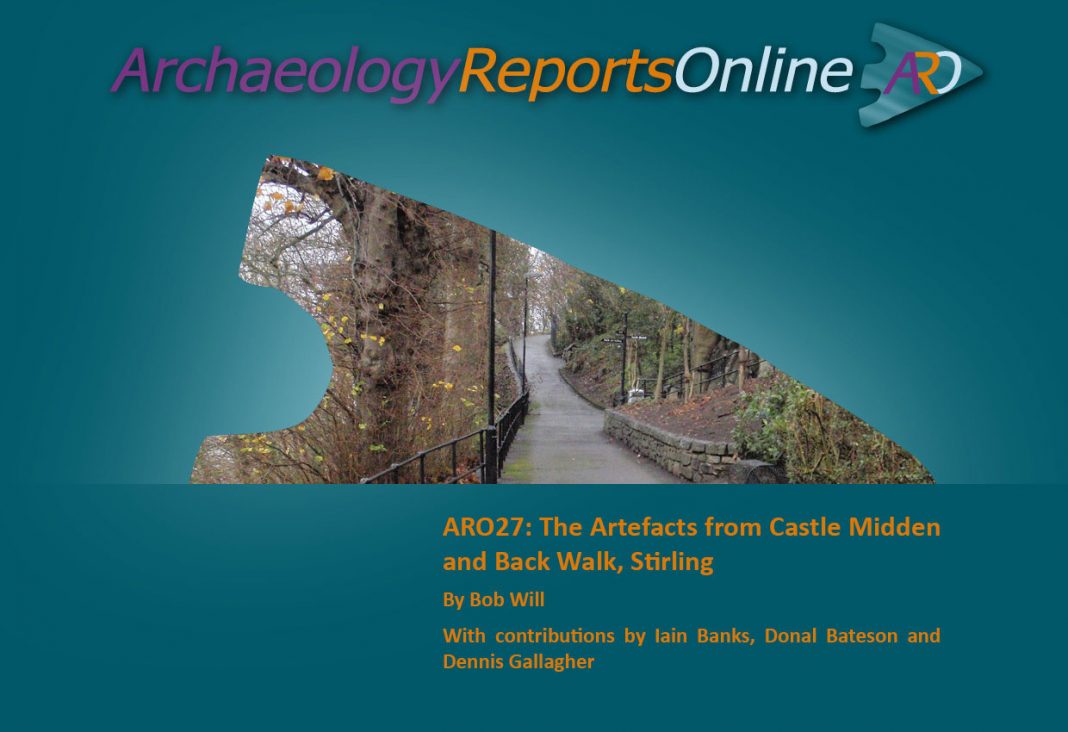 Recently published research reveals a range of artefacts recovered from two sites on the edge of the medieval burgh and castle at Stirling, that sheds new light upon the lives of the people of Stirling from the medieval period to modern times.

Material from an eroding midden below the western walls of Stirling Castle was recognised and initially recovered by local volunteers and pupils from Allan’s Primary School over a number of years and led to a programme of artefact recovery supervised by Dr Murray Cook, Stirling Council Archaeologist.

Further south along the western edge of the medieval burgh of Stirling, GUARD Archaeologists recovered artefacts during a watching brief when a section of the Back Walk footpath was repaired. This section of footpath runs behind Cowane’s Hospital next to the Church of the Holy Rude and on the perceived line of the Stirling town wall, which was constructed sometime in the sixteenth century.

A huge haul of finds

Over 2000 artefacts in total were recovered; they included medieval and post-medieval pottery, a misshapen musket ball, as well as modern glass and ceramics. Subsequent post-excavation analyses of these artefacts were co-ordinated by GUARD Archaeology Ltd.

Stirling Castle and its adjacent burgh originate in the twelfth century. The area of the ‘Top of the Town’ closest to the castle was the medieval core of the burgh, and the medieval street plan survives, along with the Church of the Holy Rude, the Tolbooth and market place and several surviving sixteenth century town houses. The Back Walk paths that wind up the steep slopes on the west side of the town were built between 1724 and 1791 by William Edmonstone, Laird of Cambuswallace. The paths run at the foot of the old burgh walls up to the castle then continue around the base of the Castle Rock and back up to the Old Town of Stirling.

The material seems to have been deposited as rubbish simply by dumping it over the edge of the crag and certainly the small abraded nature of even the ‘modern’ pottery would suggest that the material had been moved or re-deposited over time after the initial discard.

The pottery covered a wide date range and includes medieval and post-medieval material, but the bulk of the sherds are industrially produced white earthenwares that date to the late nineteenth and twentieth centuries. Among the medieval and post-medieval assemblages are examples of the main pottery fabric types found in Scotland, as well as imported material from England and mainland Europe. These give an indication of the importance of local pottery production as well as further away trade links to the burghers of Stirling throughout the centuries. The use of white slip on Scottish medieval redware fabrics appears to be quite common in Stirling as a number of sherds have now been recovered from other excavations in the town.

Numerous clay tobacco pipe fragments were also recovered from both sites, mainly of post-1850 date, but the assemblage includes four bowls from the seventeenth century. Three of the seventeenth-century bowls are of the elongated biconical form of c. 1660-80 date. The incomplete nature of the bowls hinders identification of the maker and place of manufacture but pipe making was established in Stirling in the 1660s and continued for the remainder of the century. The only other seventeenth-century pipe bowl recovered was an English form.

There was no known pipe maker active in Stirling in the nineteenth century, an unusual situation in that period. Only one maker’s mark has been identified within the assemblage, a complete stem of a Burns Cutty by Ralph Hall of Edinburgh, who is recorded as a pipe maker in the Edinburgh directories for 1866-70.

One of the more unusual artefacts to be recovered from the Back Walk was a WWI military belt buckle. The military buckle is from the Austrian army and has the double headed imperial eagle and the Austrian coat of arms and is one that was standard issue during WWI. Austria-Hungary was an ally of Germany; it was the assassination of Archduke Franz Ferdinand of Austria that started WWI.

‘Unfortunately, the buckle was a stray find so we don’t know how it got to the Back Walk whether it was lost or thrown out,’ said report author Bob Will from GUARD Archaeology. ‘Stirling Castle was an important working military barracks at the time with a military prison and hospital therefore the buckle could have come from a prisoner or it could have been picked up by a British soldier serving at the front. As this year commemorates the centenary of the end of WWI the buckle reminds us that the war had far reaching affects throughout the country.’

Another unusual artefact was a polished bone handle with the inscription Qualitie Superiere is of French or Belgian origin. This was the handle of a tool used in embroidery or lace making and does not seem out of place given the important town houses in the area. The handle probably falls into the period of the eighteenth-nineteenth centuries or even slightly earlier.

The full results of this research, which was funded by Stirling Council, ARO27: The Artefacts from Castle Midden and Back Walk, Stirling by Bob Will is freely available to download from the ARO website – Archaeology Reports Online.