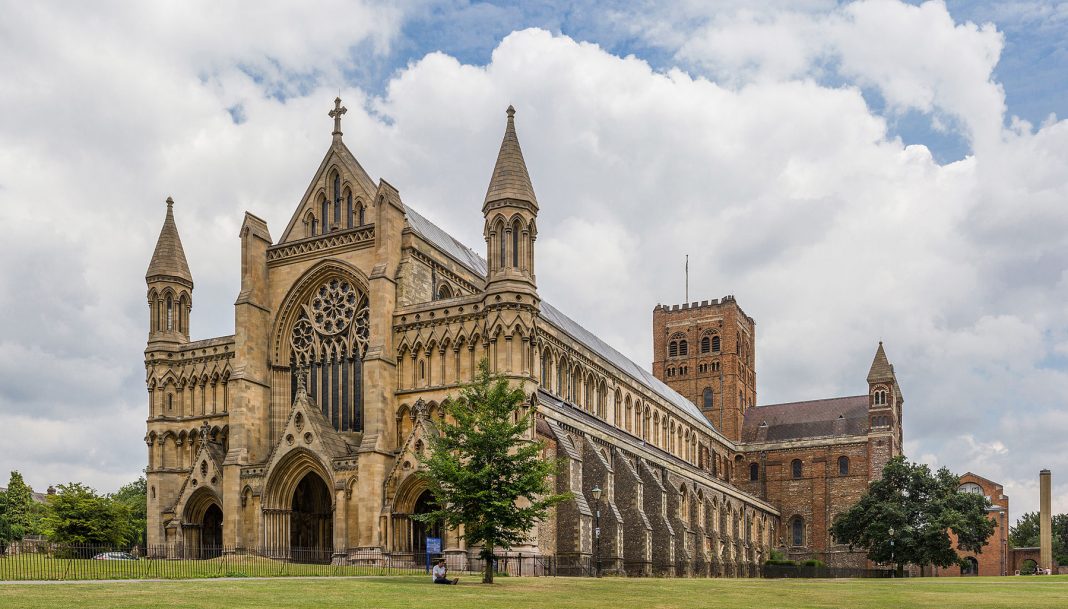 A week or so back one of the burials being excavated at St Albans yielded an exciting find – a papal bulla, then a second and then a third! Since then, research by experts at the cathedral has revealed the identity of the occupant of the grave.

Archaeologists from the Canterbury Archaeological Trust (CAT) working at St Albans Cathedral have discovered the grave of John of Wheathampstead, a former Abbot of national and international renown, who died in 1465, and whose burial site has remained a mystery to this day.

3 papal bulls provide the identity of the burial

It is the presence of these bulls that confirm that this is the grave of Abbot Wheathampstead. Professor James Clark (University of Exeter), who is an expert on the Abbey’s medieval history, has found that early in his career Abbot John secured three special privileges at an audience with Pope Martin and that he was remembered ever after for his great success when visiting the papal court.

Professor Martin Biddle, working with the team from CAT and who led the excavation work for the Cathedral’s new Chapter House in 1978, commented, “The finding of three leaden seals is a unique discovery in archaeology.”

The dig at St Albans Cathedral is taking place in advance of the construction of a new Welcome Centre, supported by the Heritage Lottery Fund, and part of the Alban, Britain’s First Saint project.  The project aims to raise the profile of St Albans Cathedral, the oldest site of continuous Christian worship in Britain and birth place of Magna Carta.

The archaeological dig provides a unique opportunity to explore the buried history of the Abbey. For a hundred years from 1750 until around 1852 the area served as the parish graveyard where whole families were buried together often victims of devastating epidemics such as the great cholera outbreak of the 1830’s. Beneath these post-medieval burials are the substantial remains of a 14th to 15th century building which historians now think may be the chapel which Abbot John built. The foundations of this chapel overlie earlier evidence for the lost Norman Apsidal chapels that formed part of the original Cathedral built by Paul of Caen in 1077.

An abbot adding to the beauty of the Abbey

The Dean of St Albans, the Very Rev’d Dr Jeffrey John, said, “It is a wonderful thing to have found the grave and relics of John of Wheathampstead, one of the most interesting and successful of the Abbots of St Albans. The papal seals that were found in his grave are a reminder of some of the privileges that he won for his monastery, and of his own national and international influence on the Church at a time when (not unlike today) it was faced with threats of division and decline”.

He continued, “Abbot John added a great deal to the renown and the beauty of the Abbey, and attracted many new pilgrims from Britain and overseas. He also defended the Abbey from destruction during the Wars of the Roses and was proud to say that he had preserved its treasures for future generations. It seems appropriate that he should appear just as we are trying to do the same through the ‘Alban, Britain’s First Saint’ project, which aims to make the Abbey much better known, and to provide better resources to welcome and inform new visitors. As John would certainly wish, in due course his body will be laid to rest again, with proper prayer and ceremony, along with his fellow Abbots in the Presbytery of the Cathedral and Abbey Church. We trust he prays for us, as we do for him.”

Professor Clark said, “Not only did Abbot John raise St Albans Abbey to the pinnacle of the English church, he was also celebrated in his own right, a Renaissance man when the Renaissance was still in its infancy, a renowned churchman, scholar and politician, who was courted by princes as well as popes.”

Read more about the excavation here.