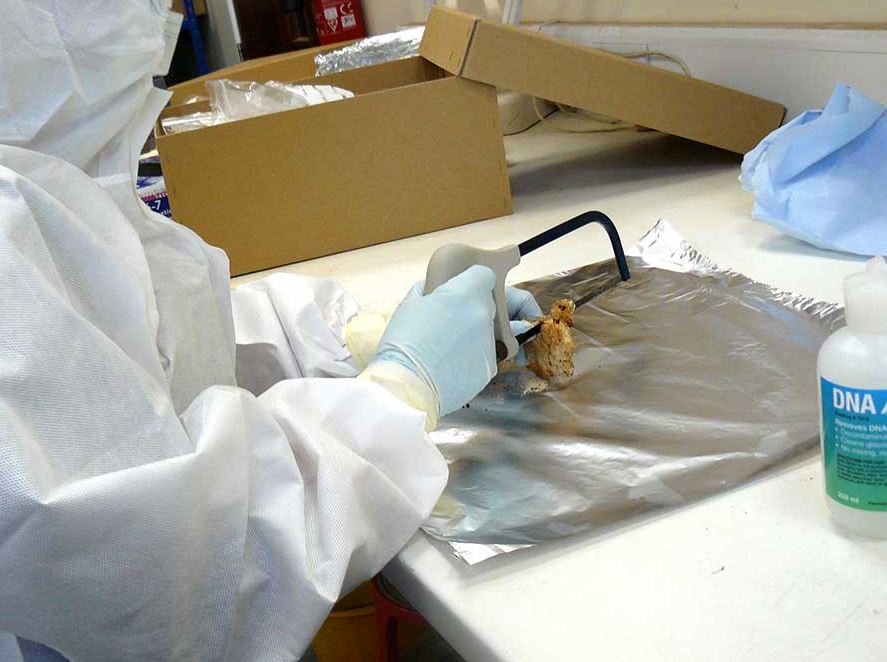 Cotswold Archaeology report that analysis of the human skeletons from Hinkley Point continued throughout 2016. Following approval by a range of consultees of a scientific pilot study on the bones, sampling has now been undertaken on a selection of individuals for traces of ancient DNA.

Staff from the Faculty of Life Sciences, Manchester University, visited Cotswold Archaeology’s Kemble office in November to take the samples of bone to their laboratory. Professor Terry Brown and his team are leading experts in extracting and analysing DNA from archaeologically recovered bones.

Within the spectrum of genetic profiling applications, ancient DNA may be used to identify genetic relationships of individuals on the maternal and paternal side. The particular interest for Hinkley therefore lies in the potential to be able to say something about these relationships among the occupants of the graveyard throughout its use.

Analysing ancient DNA is a high precision science from the beginning. Particular care is needed to avoid contamination by modern DNA, and so the staff involved wore protective clothing, while everyone else was excluded from the lab.

The best samples to take are those from well within the bone where the DNA is more likely to survive. Samples were taken of teeth, where dentine has a chance of surviving uncontaminated within a casing of enamel, and also of the dense petrous bone of the skull.

Preferably, teeth are taken with part of the jaw to limit the chance of contamination.

For the pilot study the samples came from relatively well-preserved skeletons where there was some suggestion of familial relationships because the individuals occupied the same grave, and in one instance where two individuals shared a possible genetic trait. The samples are to be analysed towards the end of 2016 and the results are expected in the first quarter of 2017.

For more information about the project see Archaeology at Hinkley Point microsite.