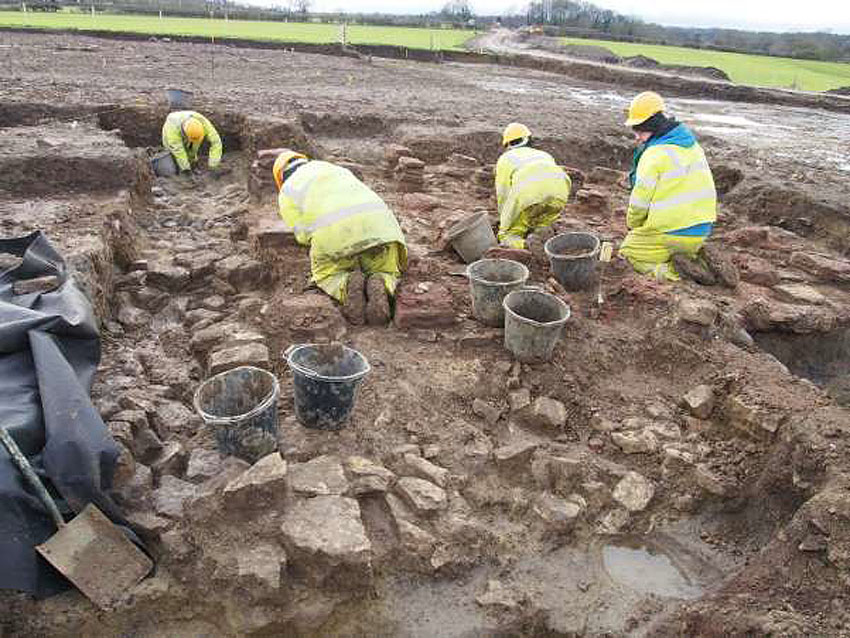 A team of archaeologists from Prospect Archaeology and PCA North have been working in advance of construction of the new A684 Bedale, Aiskew and Leeming Bar bypass. The site lies comparatively close to Dere Street, the former Roman road, and within 10km of the major Roman site at Catterick. 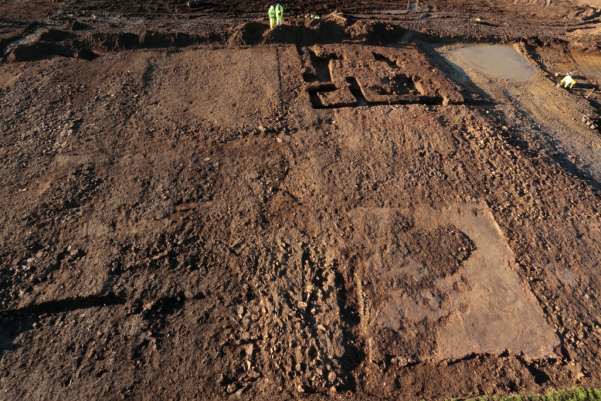 The excavation allows a glimpse into a northern Roman villa where the layout of the building has revealed a series of rooms characterised by a classic ‘winged-corridor’ or ‘porticus’ villa plan. A pavilion type-room featured a hypocaust (providing underfloor heating) within it, represented by the remaining stacks of tiles (pilae) that supported the floor.

The corridor contained small sections of surviving tessellated pavement (mosaic), whilst the north- eastern room exposed in this excavation contains a concrete (opus signinum) floor with wall plaster lying face-down on top of it. Pottery dating has established a mid-3rd – 4th century date for the finds from the villa area.

Within the proposed A684 road corridor there is also a late Iron Age / Romano-British ditched enclosure characterised by an outer ditch some 4m in width.

The project remit includes an opportunity for participation by a number of local community archaeology groups including the Bedale Archaeology and History Society, who have had a presentation from PCA staff, and the Northern Archaeology Group who will be participating in on-site activities.

This presents an all too rare opportunity for non-professional archaeologists to get involved in a site excavation. Both Undergraduate and Postgraduate students from the University of Newcastle are also assisting in the excavation project.

Professor Martin Millett, University of Cambridge, and Dr James Gerrard, Newcastle University, are acting as academic advisers on the project, and have visited the site. Prof Millett has a research specialism in Romano-British rural settlement in northern England, whilst Dr Gerrard is Lecturer in Roman studies with a particular focus on artefacts.

Jacobs UK Ltd (Jacobs) has been commissioned by North Yorkshire County Council to design and manage a programme of archaeological works in advance of the road construction. The project is being managed by Prospect Archaeology, near Leeds, on behalf of the contractor, Wills Brothers Civil Engineering.

An exhibition of some of the artefacts and finds discovered during the excavation will be held locally at a date to be confirmed.

Further Information can be viewed in this pdf BALBB poster