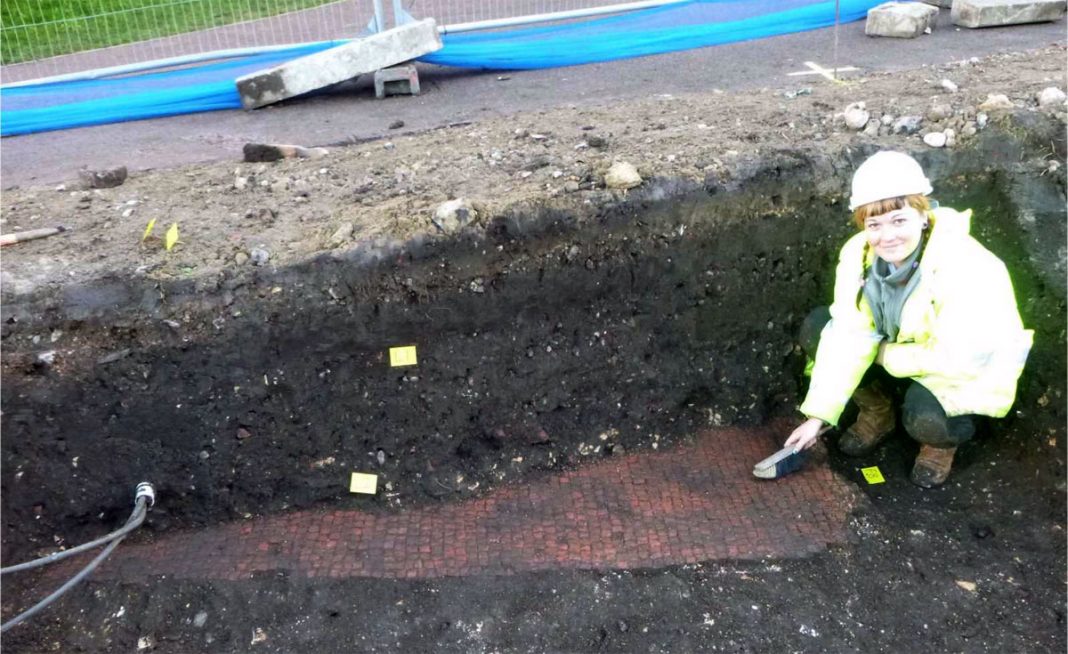 During the project, part of a well-preserved Roman tessellated floor, which would have been a floor in the high-status Roman town-house which we investigated here in 2005-6 (Building 214). A plain tessellated floor is made of ceramic cubes of one colour: this floor was made of red cubes.

The Sixth Form College grounds are rich in archaeology and the Trust has been conducting investigations in the college grounds since the 1970s, as part of the on-going development of the school and the college and their buildings.

The college grounds are bordered by the Roman town wall, at the north-western corner. They include part of the site of the Roman army fortress, including the remains of legionary barrack-blocks. At least one of these continued in use during the early years of the Roman town in AD 49-60/1. After the Boudican revolt of AD 61 and throughout the Roman period, the area was filled with Roman houses and streets with some horticultural activity in between.

Building 211 was represented by masonry wall foundations, robbed-out wall lines, and floors of mosaic, opus signinum and tessellation. Finds of marble and painted wall-plaster showed that this was a high-status Roman town-house.

Another building nearby (Building 212), with a timber water channel, may have been a room of a bath-house or even a shrine to a water deity. To the east of Building 211 and Building 212 and across a gravelled street, we uncovered the remains of a third building (Building 214), which seems to have been another high-status town-house, with masonry wall foundations, painted wall-plaster, and opus signinum floors.

We think that Building 211 may have been a mansio, a residence maintained by the state for officials travelling on state business.

The tessellated floor which we uncovered last week provides further evidence of the adjacent Building 214.

All reports on our fieldwork projects are published online at http://cat.essex.ac.uk/ : read more about these three Roman buildings in CAT Report 347.

The image above shows archaeologist Sarah cleaning the tessellated floor.  The site was supervised by Trust archaeologist Mark Baister.

By Way of the Sea: Exploring a Bronze Age maritory in...