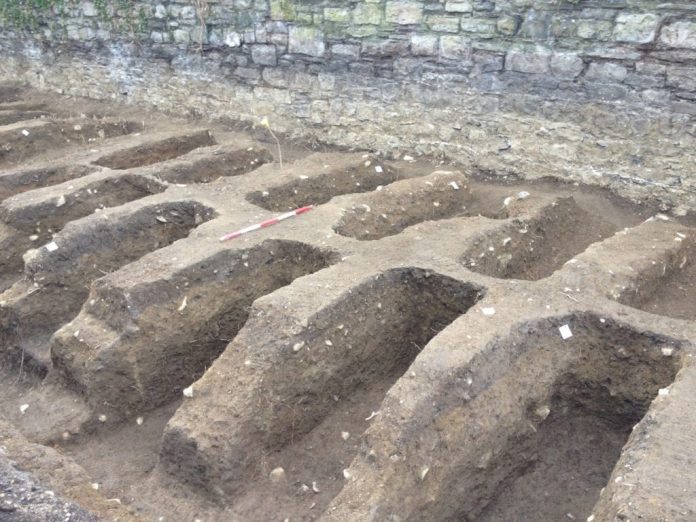 Project Background
Archaeological monitoring of construction groundworks was carried out in conjunction with construction of Luas Cross City, a light rail project that extended the Luas Green Line northwest through the centre of the city. These works were undertaken by Rubicon Heritage Services Ltd. for SISK Steconfer Joint Venture Ltd (SSJV) on behalf of Transport Infrastructure Ireland (TII). Archaeological test trenching identified two NE–SW orientated parallel ‘charnel’ trenches—containing disarticulated human remains and archaeological excavations were carried out over winter from October 2015 to February 2016.

Historical Background
During the 18th and 19th centuries the Grangegorman area became the focus for the development of a series of institutions to cater for the sick and indigent. Construction of the Richmond Penitentiary commenced in 1812 to a design by Francis Johnston, it served as a penitentiary from 1820 to 1831 and as a hospital during the 1832 Cholera Epidemic. Original accounts from the period state that the garden of the Richmond Penitentiary was used as an overflow cemetery when the epidemic reached Dublin, in March 1832. In 1870, the Midland Great Western Railway acquired land from the adjacent Richmond Female Penitentiary site to facilitate the expansion of the rail yard at Broadstone. Accounts of the expansion note the discovery of burials and their reburial within these lands.

The Excavation
The investigation methodology at the site was complicated by the presence of Japanese Knotweed (Fallopia Japonica) in part of the site. Under Section 49 of the European (Birds and Natural Habitats) Regulations 2011 it is prohibited to introduce or cause the dispersal of this species. A concentration of knotweed roots was found adjacent to the Richmond Penitentiary wall which formed the north-western boundary of the site. Ground reduction across this area was under strict archaeological and ecological supervision and two rows of previously undisturbed graves were identified in addition to the charnel trenches.

The longest and deepest of the two charnel trenches extended for 45 m in a NE-SW direction. The second, shallower trench lay to the northwest of the first and contained less concentrated amounts of bone. To maintain an approximate count of individuals whose remains had been re-interred in the trenches, each complete or almost complete cranium and mandible was accorded a number and its location within the trench was recorded. The final number of crania recorded on site was 1697. In places, some attempt had been made to carefully place the remains within the trench, this could be seen in the way layers of crania were found in the bottom of the trench; though most of the trench had more likely been filled by bones tipped in from carts or wheelbarrows. A single headstone was deposited within the larger of the two trenches. This was the only grave marker found during the investigation and commemorated one Anthony Donlevy (sic) with a death date of 28 July 1832 during the peak of the cholera epidemic in Dublin.

The Burial Ground
A total of 30 burials were identified which were set out in two discrete parallel rows. The burials were orientated NW–SE (heads NW) perpendicular to the Richmond Penitentiary boundary wall. The outer row contained 16 burials and the inner row contained 14 burials. The excavation results have indicated that apart from one, all the deceased were buried in coffins and there were no instances of intercutting graves.

Osteoarchaeological Analysis
Since this is a catastrophic assemblage it provides an important snapshot of the pre-Famine population of Dublin city. Osteological analysis has shown that of the 30 articulated skeletons recovered, 12 were male, 14 females, two of ambiguous sex determination, one adolescent and one infant. The articulated burials were radiocarbon dated to cal AD 1680–1940 (2σ, SUERC-72381).

A total of 1,672 disarticulated human crania were recorded during analysis, with 1,543 minimum number of individuals, based on the left parietal bone. Adult remains comprised the majority of the material, 97.5%, compared to just 2.5% subadults. Males represented 43.4% of the disarticulated crania in the assemblage, females 44.7% and unsexed adults 11.8%. A male cranium from the disarticulated assemblage was radiocarbon dated to cal AD 1641–1928 (2σ, SUERC-72382).

Poor dental health was a feature in this population, with a higher rate of females affected by caries and ante-mortem tooth loss, and more males displayed calculus and periodontal disease. Males were affected more by non-specific infectious diseases and both sexes were equally susceptible to dietary deficiencies or illness. Males were more likely to be smokers and were involved in heavy physical work from a younger age than females. Specific infections present included syphilis and tuberculosis, and metabolic conditions such as scurvy and rickets were also identified. There were also conditions present that are normally associated with an ageing population and slightly more males than females were victims of interpersonal violence. There was also evidence of post-mortem dissections from the disarticulated assemblage on cranial and vertebral fragments.

Isotopic Analysis
The strontium and oxygen isotope data indicate that most of the 23 individuals analysed are likely to have been local to Dublin. The carbon and nitrogen data suggest that there was a difference between the dietary inputs of the males and females, with some of the males consuming low levels of marine resources as adults. The females appear to split into two groups, one of which may have had maize in their diet; this might be the result of the greater likelihood of women and children seeking aid in workhouses. The range of results may also reflect the mixture of social classes affected by cholera.

Dissection and the Anatomy Act, 1832
The peak of the cholera epidemic coincided with the introduction of the Anatomy Act 1832. During the cholera epidemic in Dublin there was a genuine fear among the poor that if they died in hospital their bodies would be handed over for dissection by medical students; evidence from the site suggests people were correct in their suspicions.
​
Discussion
The cholera epidemic is a period of Irish history which has tended to be somewhat overshadowed by the devastating effects of the later Great Famine of the 1840s and the results of the excavation and the skeletal and isotopic analysis have shed some light on this period of Dublin’s history. A significant number of important institutions dealing with the sick, indigent and criminal were located nearby; though it is presumed that most of the individuals buried at the site were victims of the cholera epidemic. The site also challenges the conventional wisdom that a short-lived, short-purpose cemetery would primarily have had internments in collective pits; individual graves were potentially more common, and this was a closely planned and rigorously managed cemetery for the duration of its usage.