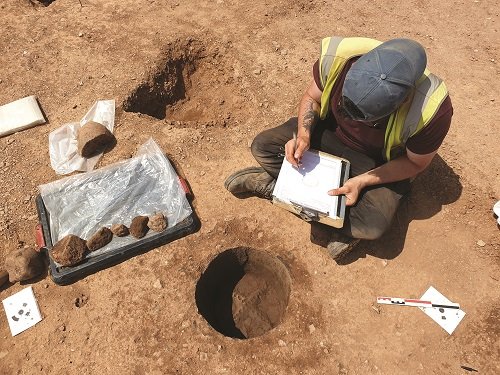 Last year, a team from OA South excavated a site at Nerrols Farm on the edge of Taunton for David Wilson Homes. One of the more surprising discoveries was a group of seven pits, all of which contained snugly fitting pottery vessels. The lower walls and bases of these pots survived, and the base of one was also internally decorated with strips of clay that had fingertip impressions.

Initially, it was suspected that these sunken pots were used as storage or cooking vessels, particularly as one was filled with fire-cracked ‘pot-boiler’ stones. To learn more about the vessels’ use, samples were sent to the University of Bristol for a programme of residue analysis during the subsequent post-excavation phase of the project. Residue or lipid analysis is used to detect fats, waxes and resins absorbed by and preserved within pottery fabrics during use, offering insights into what food was cooked or how the vessels were otherwise used. Fragments of the sunken pots, as well as a selection of other vessels from the site, were analysed.

It was evident from the analysis that nearly half the vessels contained lipid residues. Although these provided some evidence for the cooking and/or storing of beef, mutton or goat, and in one instance pork, most of the lipids or fats related to dairying. Indeed, lipids from dairying dominated the results from the sunken pots, and the base from one of these vessels had very high dairy lipid readings, with less concentrated readings from its sides. Importantly, this seems to imply that, this pot at least, was used to store dairy products, which resulted in the base of the pot absorbing more lipids than its sides.

The results suggest that the sunken pots from Nerrols Farm were used to store milk, butter or yoghurt. The vessels would have kept the dairy products cool and fresh and provided some measure of refrigeration. Alternatively, in an area famed for its Cheddar cheese, the evidence might relate to early cheese-making!

Discovering the house of the Blackfriars

Continuing aDNA Analysis of Neolithic and Bronze Age people in the...