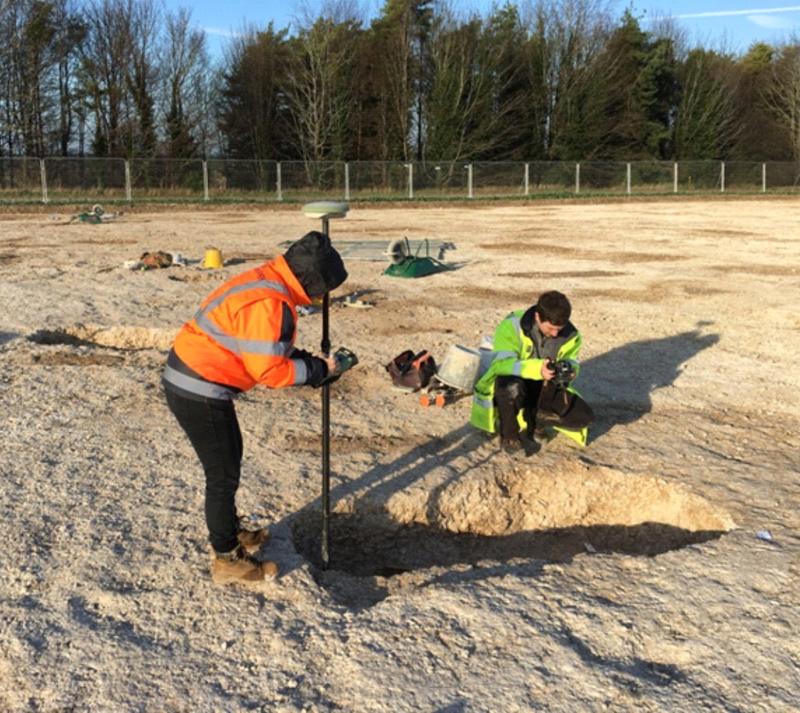 A comparison between geo-rectified photography and photogrammetry to record human remains.

In late 2015 Wessex Archaeology started the excavation of a large Anglo-Saxon cemetery at Bulford which presented the opportunity to carry out some tests to investigate the best, most cost-effective and efficient way to record burials. We wanted to understand the differences and economic viability of some of the most popular techniques on the market: geo-rectified photography and photogrammetry.

After permission was granted by site manager Simon Cleggett, in December 2015 the WA Geomatics team, Damien Campbell Bell and myself gathered at Bulford to carry out this field experiment.

For the work, we used a Leica Netrover Viva GPS and a Pentax K50 digital SLR camera for the photogrammetry and the geo-rectified photography. Additional accessories included a ladder and lots of targets.

The type of camera we used (a Pentax K50) is a weather-resistant digital SLR camera with approximately 16.49 Mega pixels and mounting 18-55 mm lens. We normally use this type of camera in the field. A Leica Viva GPS was also employed to record the position of the targets used in the photos.

For the success of both the photogrammetry and the geo-rectified photography, targets were placed both on the base of the graves and on top at ground level.

With photogrammetry, we can produce a 3D model using a set of photos taken from every angle of the subject. With the Pentax K50 we took approximately 23 photos for each grave; the shots were taken all around the grave cut, on top and at the sides aiming to get complete coverage. These photos were later post-processed to obtain a photogrammetry 3D model. We tried to keep the number of photos below 50 so that the processing would be faster.

As for the geo-rectified photography, each burial was photographed from the top in one single shot. Geo-rectified photography only requires one image, but for it to work it needs to be taken on the same plane as the subject, with the camera in a horizontal position. If these two important conditions are not met, the photo can be distorted and would be unusable. This operation required the photographer to climb on a ladder as to make sure that the whole grave was in the photo frame, this also contributed to the photo being less detailed because of the distance. Afterwards, the middle point of each target was recorded with a Leica Netrover Viva GPS with accuracy settings set below 0.02 m.

For both photogrammetry and geo-rectified photography, to measure the position of the targets with a GPS or Total station is essential as this will provide the constrains for the 3D model and will also accurately locate the burials within the national coordinate system.

Back in the office, the data from these various sources were post-processed and compared to each other using the photogrammetry models and the metric surveys as references. These different methodologies were analysed according to level of accuracy achieved, time of execution, least potential damage/disruption caused to the archaeology, time of post-processing and cost for the project.

The results of these techniques were very good but photogrammetry was most successful, the 3D models produced were highly accurate. Unfortunately, some of the photos taken for geo-rectification had to be discarded, highlighting one of the problems with the geo-rectified photography: the shot must be on point and horizontal to minimise any distortion; if the shot is taken too far away many small details will not be clear. In addition to this, another problem that we encountered was the lack of space inside the grave to place the targets. Still, despite some problems in post-processing, the geo-rectified photography gave good accurate results, the photos were rectified and geo-located to be then digitised in the office. The records obtained with geo-rectified photography worked out to be the fastest technique while photogrammetry requires powerful computers and can take a long time to process.

For both of these methods used there are pros and cons so that one might be better than the other, depending on what level of accuracy is required and how much time is available on site.

It was really instructive and fun to experiment with these methods on site and to compare them; the results obtained are going to be very useful to plan future archaeological works, allowing us to consider different methodologies according to specific site conditions and project budgets.