HomeGeneral NewsReburial, another moment in the story of Holy Trinity, Bradford on Avon
FeaturedGeneral News

Reburial, another moment in the story of Holy Trinity, Bradford on Avon 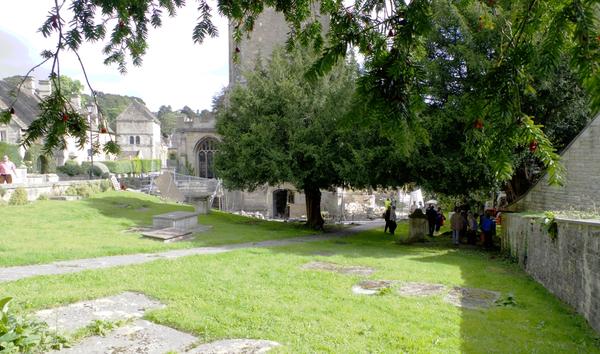 Wessex Archaeology have now finished the on-site analysis of the large assemblage of late Saxon to 19th century remains, recovered during the major regeneration works at Holy Trinity, Bradford on Avon.

The human remains and their associated artefacts were reinterred in the Holy Trinity churchyard on Friday 16 September 2016, when Rector Joanna Abecassis performed the re-committal in the presence of members of the local community (including those who had generously volunteered on the project), the renovation team, and WA staff Bruce Eaton (Project Manager), Lynn Hume (Supervisor) and Senior Osteoarchaeologist Kirsten Egging Dinwiddy.

The carefully considered and thought-provoking words of the Rector referenced the major social, political and cultural changes experienced during the lifetimes of those being reburied, and fittingly included prayers from the Saxon, medieval and post-medieval periods.

Many of those involved in the project have expressed their sense of privilege, at having had the opportunity to help to find out more about the past inhabitants of Bradford on Avon.

The analytical work is still ongoing, with the results of further radiocarbon dating of the Saxon burials due within the next few months. Watch this space for further updates.

More information about the site can be found here:
New Evidence for ‘Lost’ Church
Saxon Bradford on Avon