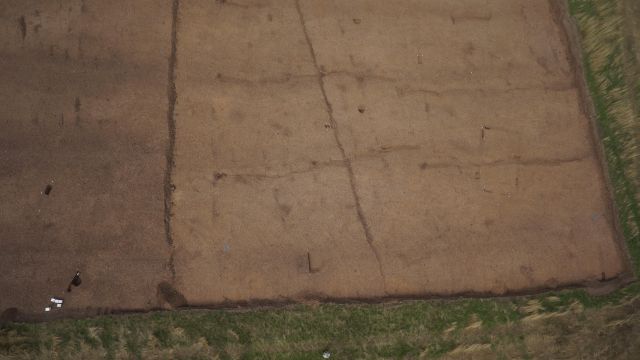 In January 2016, an excavation by Oxford Archaeology, 1km north of the confluence of the Rivers Avon and Stour at Shottery, near Stratford-upon-Avon has revealed a sparse but intriguing range of archaeology.

The location seems to have been a locally important and long-lived burial ground in the prehistoric period, with traces of two small probable burial monuments, thought most likely to be of Neolithic and Early Bronze Age date respectively. Perhaps the most unusual and mysterious feature is a small rectangular ditched enclosure, found close to the Shottery Brook, a tributary of the River Avon. A single pot sherd from the ditch is of uncertain date, but on balance we think that it is most likely to be a very small plough-levelled burial mound or mortuary enclosure of Neolithic date. Radiocarbon dates will, it is hoped provide more definitive answers.

Also present on this site, in the SW corner, is a small, previously unknown, plough-truncated roundbarrow, associated with a single central human cremation burial, placed within a Bronze Age pottery vessel. A second cremation burial was found to the south. During the Roman period, the site lay on the eastern edge of an agricultural landscape, associated with a Roman farm known from previous trial trenches in the fields to the west. Then in the early Anglo-Saxon period a group of settlers made their home beside the Shottery Brook, among the ancient burial mounds. ‘Dark Age’ settlement evidence in the Avon Valley is rare, typically slight and difficult to spot, so this is an important discovery.

The settlement evidence consists of a cluster of features, including a fire-reddened shallow hearth pit, a gully and a row of postholes, which probably represents the location of a house. Traces of a ‘sunken-featured building’, a characteristic building type of this period, were found not far away. The soil infilling the hearth and the sunken-featured building each produced fragments from bone combs, a typical find on sites of this period. Prehistoric burial mounds were often regarded as special places and useful landmarks by communities in the Anglo-Saxon period, and were sometimes re-used as burial grounds, although there is no evidence for that here. We know that there was an extensive Anglo-Saxon estate called Shottery from a charter of Offa, King of Mercia, dating from between c.AD 699 and 709. Early forms of the place-name (Scotta rith in 699-709 and Scotbroc in 1086) suggest that there may have been an Irish (then called Scotti) settlement based around the Shottery Brook at an unknown date prior to the late 7th century.

The excavation was commissioned by Orion Heritage on behalf of strategic land developer Hallam Land Management and Bloor Homes Ltd at the request of Warwickshire County Council following the discovery of a sherd of Peterborough Ware pottery (dating from the Middle Neolithic period) and an undated cremation burial during evaluation trenching in 2014.