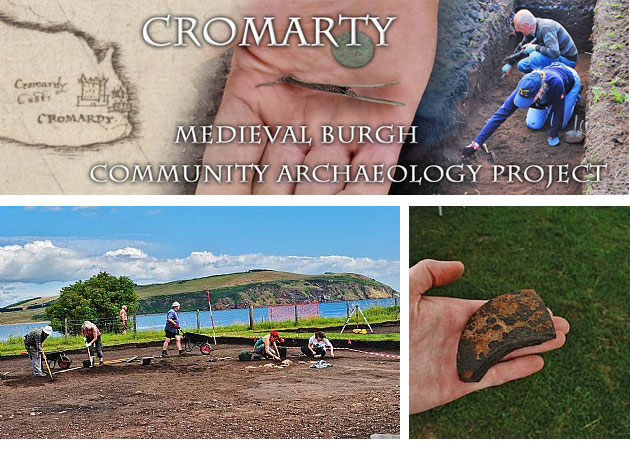 A severe storm in December 2012 caused significant erosion to the coastline at the eastern end of Cromarty, exposing a sequence of archaeological deposits along the shore path to the South Sutor.  The combination of high tides with the significant ground swell truncated the footpath, shearing away the turf and grass foreshore to reveal four major archaeological exposures.  The areas of erosion appear, from historical documentation, to be centred on the core of the Royal Burgh close to the former location of the Medieval Mercat Cross and Tolbooth.

Preliminary archaeological investigations of the deposits exposed by the storm have revealed extensive and well-stratified midden material and structural remains relating to Medieval and later settlement on the site – an area for which we have limited historical records.  Initial specialist analysis of ceramics from the site has suggested that much of the earlier material dates to between the 13th-15th centuries.

The Cromarty Medieval Burgh Archaeological Project was formally established by local community volunteers due to considerable public interest, both young and old.  Excavation on the site has great potential to provide signficant information about the formation of the Medieval burgh and potential earlier settlement.