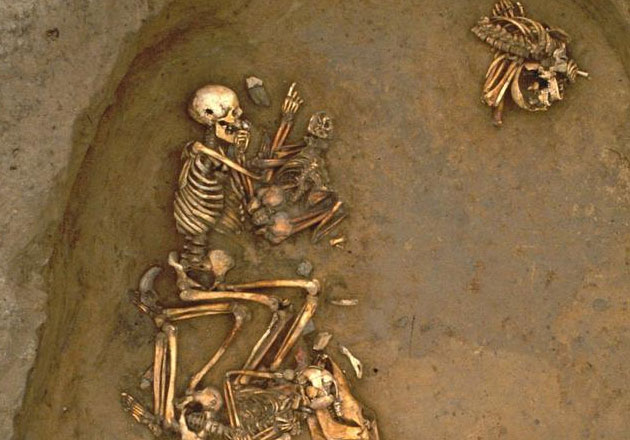 Extraordinary finds made during excavations at Cliffs End Farm, Thanet, Kent in 2004-5 have allowed archaeologists at Wessex Archaeology to rethink the movement of people between this part of Kent and Continental Europe during the Bronze Age and Iron Age. Support from English Heritage has enabled an extensive radiocarbon dating programme and isotope analyses to be undertaken. These have produced some surprising results which shed new light on occupation, mortuary rites and the movement of people during later prehistory.

The site is located on the southern edge of the Isle of Thanet, roughly 300 m from the shoreline in the north-west corner of Pegwell Bay. The excavation was undertaken prior to development of land for housing, and uncovered six round barrows, Bronze Age enclosures, and an Anglo-Saxon cemetery and settlement.

A later prehistoric midden pit and an enigmatic large mortuary feature in use during the Bronze Age and Iron Age, which contained an extraordinary series of deposits of human remains (complete in situ burials, placed groups of articulated bones, as well as disarticulated remains), accompanied by complete or near-complete carcasses of animals (lambs, horse, cattle), and some placed artefacts.

A number of mortuary rites were observed, which included corpse manipulation, use of communal and individual graves, human and probably animal sacrifice, excarnation with manipulation and redeposition of partially articulated body parts, and curation of individual skeletal elements. The extensive programme of radiocarbon dating and isotope analysis, generously funded by English Heritage, further light has been shed on these complex deposits by providing a robust and precise chronology.