The Maryport Roman Temples Project is on site until Friday 14 August.

It is designed to learn more about the famous altars which form the core of the Senhouse Roman Museum display and to understand better the complex religious landscape of Roman Maryport.

“’So much depends on this last crucial season,” said Ian Haynes. “We believe that we have located the general area where the altars once stood, now we will close in on the part of the site where we think that they were originally erected. By the end of the season we hope to have a detailed understanding of one of the most important Roman cult complexes ever to have been explored in Britain.”

Most of the stone altars now in the museum were dedicated by the commanders of the Roman fort each year and were found in an excavation in 1870 by Humphrey Senhouse.

In 2011 the Temples Project team showed that the altars had been re-used in the foundations of a large Roman timber building or buildings near the highest point on the ridge overlooking the Solway and the fort, and had not been buried as part of a religious ceremony as previously thought.

The team found another complete altar at the site in the 2012 excavation, with the fifth inscription recovered from the Roman Empire to record T Attius Tutor, commander of the Maryport garrison, and a man known to have served at other times in Austria, Hungary and Romania. A late Roman/early Medieval cemetery was also discovered.

Finds from the graves were few, but included a bead bracelet and necklace and a tiny fragment of ancient textile, a remarkable survival. Carbon dating of the fragment showed the wool from which the textile was woven was most probably sheared sometime between AD 240 and AD 340.

In 2013 the team unearthed the north-westernmost classical temple known from the Roman world, built in the second century. Information gained allowed the team and a specialist archaeological illustrator at Oxford Archaeology, commissioned by the Hadrian’s Wall Trust, to produce a reconstruction drawing of this building with its red sandstone walls, yellow sandstone decoration, grey slate roof and columned entrance.

In 2014 the team completed their investigation of the classical temple, including the section of collapsed wall recovered at its southern end, and other possible temple structures nearby.

Jane Laskey, curator of the Senhouse Roman Museum said: “We’re delighted to have the team back on site with our volunteer excavators.  The volunteers make a great contribution to the excavation – we couldn’t have achieved as much as we have over the years without them.

“This is the last year of the project so it’s the last chance for visitors to see this area of the site and to find out about the excavation directly from Ian and Tony at lectures over the next eight weeks.”

Graham Bell, director of North of England Civic Trust, is keen to support this excavation. He said: “Since acquiring Camp Farm in March, NECT has been working closely with the team to enable this year’s excavation to go ahead as planned.  It holds exciting promise, and provides a great opportunity for volunteers to share in the next chapter in this amazing story of revelation.” 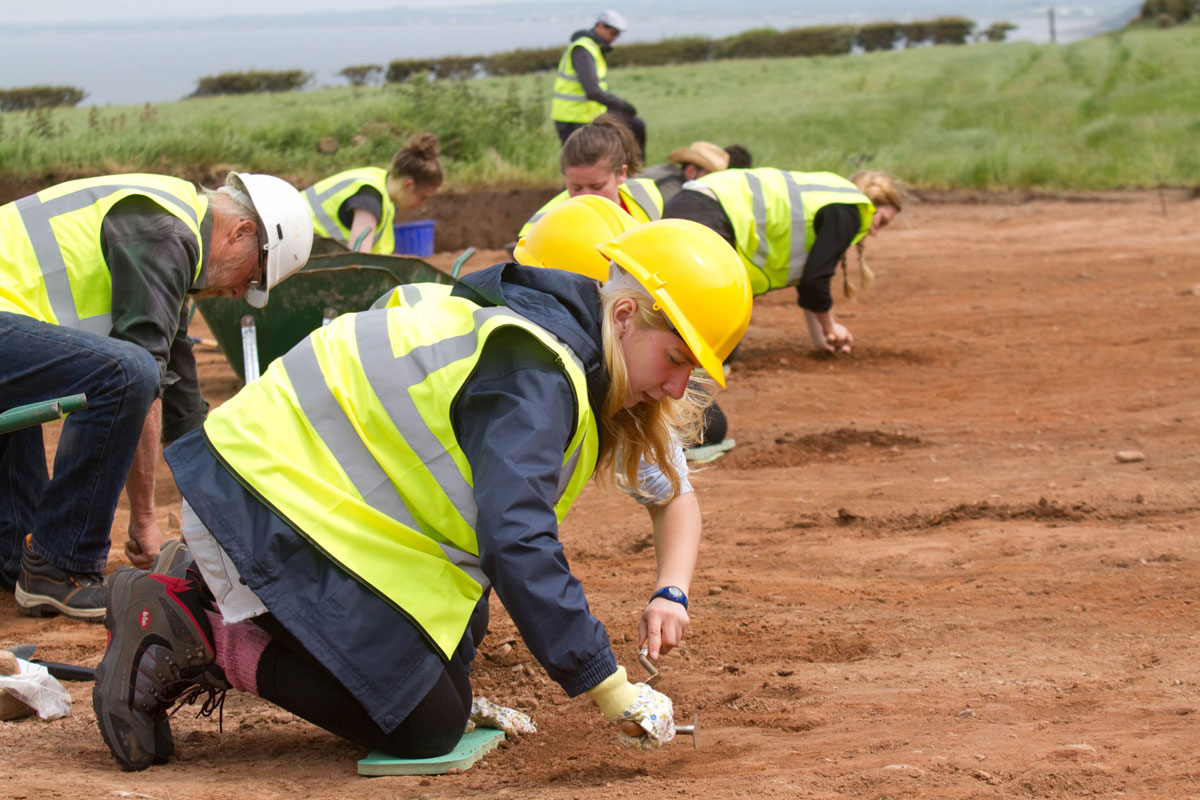 The Roman Temples Project won the title Current Archaeology Research Project of the Year 2015 in March.

The Roman fort and nearby civilian settlement at Maryport were a significant element of the coastal defences lining the north western boundary of the Roman Empire for more than 300 years. They are part of the Frontiers of the Roman Empire World Heritage Site which also includes Hadrian’s Wall, the Antonine Wall in Scotland and the German Limes.

Tours of the Temples excavation site led by the museum’s volunteer guides start from the museum on weekday afternoons at 2pm and 3.30pm. They include entry to the museum where there is more information about the Temples Project and the Romans in Maryport. Costs are adult £4, child £1.50, family £10.

Schools and other organised groups should contact the museum in advance to arrange a visit on 01900 816168 or email senhousemuseum@aol.com

Lectures and workshops have been arranged too, and this year’s Roman Festival weekend includes an excavation open day on Sunday 9 August.

The Senhouse Roman Museum is open every day during the summer from 10am to 5pm. More information is at www.senhousemuseum.co.uk

Ian Haynes is also running the free FutureLearn online course Hadrian’s Wall: Life on the Frontier available at www.futurelearn.com/courses/hadrians-wall.  The course attracted participants from over a hundred countries when it ran for the first time in September 2014.

The Temples Project is carried out by a team from Newcastle University, supported by local volunteers, led by Professor Ian Haynes and site director Tony Wilmott.