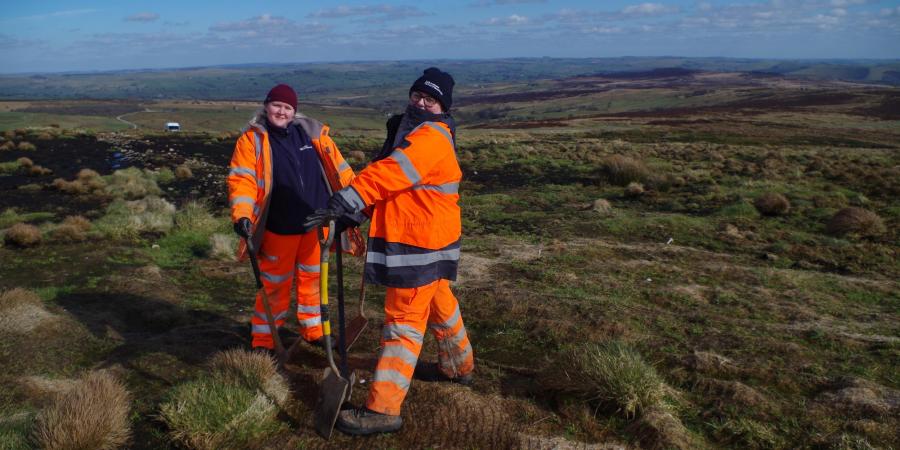 Staff from Wessex Archaeology’s Sheffield office recently investigated a pair of prehistoric bowl barrows within the Peak District National Park. This work was carried out to assist Landmarc Support Services in their sustainable management of MOD land at the Leek Training Estate, Staffordshire.

The area around the barrows had suffered from an upland fire in 2018, occurrences that are becoming more common as we see our climate change, and it was suspected that the fire may have caused extensive damage to the buried remains of the barrows. This demonstrates how the increase in spells of hot and dry weather, by making upland fires both more likely and more severe, can damage the archaeological record of our moorland areas.

Bowl barrows were commonly, but not always, used for the burial of the dead. Most examples belong to the period 2400–1500 BC (Early–Middle Bronze Age). They comprise mounds of earth and stone, sometimes enclosed by a ditch. Graves can be found sealed beneath the mound, inserted into it or placed nearby. Although superficially similar, barrows are found in a variety of landscape positions, and can exist in isolation or form clusters or alignments. Other variations include the treatment of the body in death (ie, cremation or inhumation) and the presence and type of grave goods. Historic England records there are over 10,000 surviving bowl barrows nationally (many more have been destroyed), and they are widespread across Britain

Three test pits were dug by hand into each barrow. We learnt that the monuments were covered by peat-rich sandy topsoil, 0.2 m thick. This had been directly affected by the fire, but the underlying layers had not. Even so, it is probable that the topsoil helps protect the barrows – with its thinning through fire damage, these otherwise well-preserved monuments will have been left more vulnerable.

It is likely that these mounds would have covered a burial of some description, and the test pit in the middle of the Merryton Low barrow found possible evidence for a small, stone-lined grave known as a cist. This feature, made up of a cluster of stones and yellowish brown clay was left unexcavated as its full extent continued beyond our test pit, but it clearly shows the potential of these monuments to contain intact burials.

Within the mound deposits, a number of worked flints were found, some relating to the production of small stone tools known as microliths, and of Late Mesolithic (7000–4000 BC) date. Such material, probably accidentally mixed in with the barrows when they were originally constructed, demonstrates the earlier use of the area for possible settlement, hunting and tool production.

The humble appearance of these low hummocks therefore belies their significance. Not only are they important as burial monuments – with all the accompanying associations of commemoration and remembrance – but they also preserve material illuminating the earlier use of the landscape. Conversely, people utilising and managing the uplands have found new roles for these monuments since their construction: on Merryton Low bowl barrow our test pits exposed traces of a drystone wall that once followed the boundary of the parishes of Fawfieldhead and Onecote. Modern lines on maps can have deep histories and there are many examples of administrative boundaries incorporating barrows and other ancient earthworks. Merryton Low bowl barrow also supports a trig point; this was built for functional survey on a high point, but has become an unofficial monument of remembrance for the military teams training on the moors. A red burst of poppies within the muddied browns and greens of the moorland returns the barrow to its original function as a monument to those who have been lost.

Wessex Archaeology would like to thank Landmarc Support Services for their assistance prior to and during the works, and to Historic England and the Peak District National Park Authority for their advice and monitoring of the project. The project was carried out by Owen Batchelor, Sarah Pedziwiatr and Elizabeth Statham, and managed by Milica Rajic.