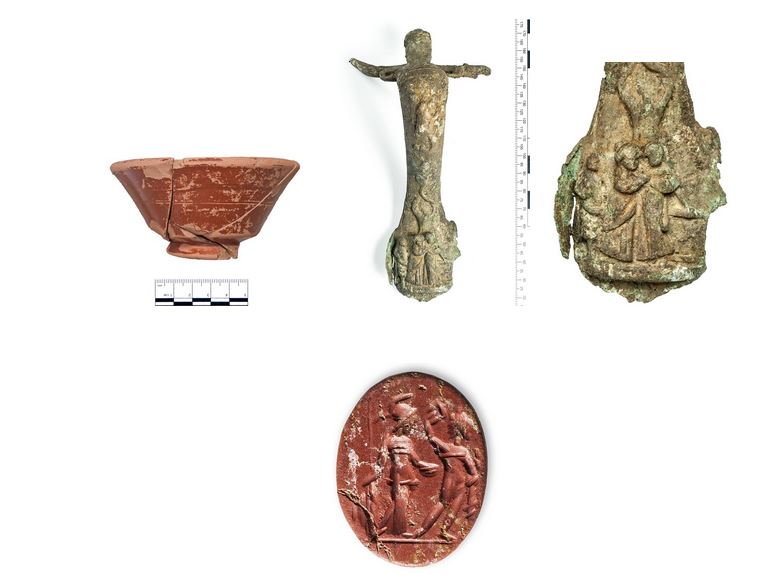 The objects – an engraved gemstone, a metal jug handle, and a pottery (samian ware) vessel from France – represent just a selection of the rich assemblage of grave goods that had been deposited during the late 2nd century AD.

The burial was uncovered in October last year during a metal detecting rally undertaken by a group called the Weekend Wanderers. Investigation of a signal revealed parts of several iron and copper alloy objects. The hole dug by the detectorists also exposed samian ware vessels that indicated that the finds formed part of an in-situ Roman burial.

Oxford Archaeology was called in by Buckingham County Council to investigate. As work progressed the increasing complexity of the remains (exacerbated in particular by the very difficult soil conditions) meant that excavation and recording took place over several days.

Many of the objects within the grave had been completely crushed by modern ploughing and farm machinery, and so a number of objects were incomplete, while others were so fragmented as to make interpretation difficult. The cremation urn was in particularly poor condition and was block lifted for excavation in spits back at the office. Within the remains of the cremation urn were found iron hobnails from a shoe, and an intaglio or engraved gemstone, probably jasper, depicting two figures – the goddess Minerva on the left facing a smaller figure who holds up a wreath.

A collection of iron objects is interpreted as the remains of a lamp holder or open lamp with related pieces forming parts of an arrangement for suspension. The decorated bronze jug handle is decorated at its base with a ‘sacro-idyllic‘ scene. No exact parallels for this scene are known at present and is a piece of national importance, enhanced by association with a securely dated burial context.

Analysis of the cremated bone recovered from the urn suggests that an adult, possibly female, was buried in the grave.

The burial lies at the western edge of the distribution of a group of relatively rare cremation burials found across south-eastern Britain which contain glass and bronze vessels and lighting equipment. The rich burial at Creslow is an important addition to this body of evidence.

The selected objects will be on display for three months at the museum in Church Street, Aylesbury, while funds are raised for essential conservation work on the finds and to allow the discovery to be published.

Ancient coffin found near Richard III site to be opened