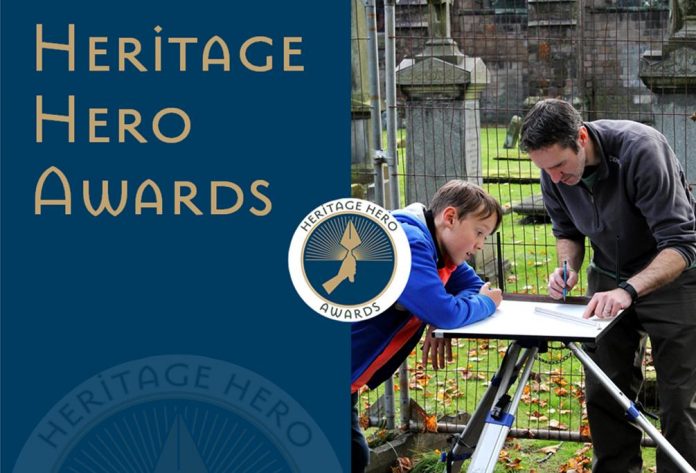 The Heritage Hero project was initially an archaeology education project run by Archaeology Scotland between 2012 and 2015. It soon became clear that no achievement awards existed which were specific in offering a reward for archaeology and heritage projects and the Heritage Hero Award was born.

At the time there were, and indeed still are, many other youth awards encouraging genuine and meaningful youth engagement in other subject areas, with archaeology projects often being left unrecognised or shoehorned into pre-exsting awards in the arts, natural heritage or similar volunteer based activity. In 2016 the Archaeology Scotland learning team piloted the Heritage Hero Award, designed to specifically recognise youth engagement in archaeology and heritage and position it as an important part of youth work and education.  The sense of achievement felt by those completing a heritage project and gaining a national award strengthens the engagement.

The 6 pilot projects, expanded to 23 completed projects and 765 awardees by the end of the first year.  and following this successful pilot, the Heritage Hero Awards was officially launched in January 2017, to coincide with Scotland’s Year of History, Heritage and Archaeology.  Since then, over 13,000 young people have gained awards, with 40 projects currently underway. The team worked hard over the last few years to increase award partnerships and reach areas which previously had little uptake.  Projects have now been completed in 31 of Scotland’s 32 local authorities.  Fingers crossed for a full house soon!

Due to demand from project partners the award is now open to adults too. With awardees currently ranging from ages 4 to 84.  Community and other adult groups have used the awards as a means of recognising the achievements of their volunteers. Adult projects have ranged from restoring scheduled monuments to improving access to, and installing interpretation at historic sites.

Why we love them

Something we have been exceptionally proud of is the role of the Awards in championing accessibility in heritage and archaeology.  The awards are deliberately designed to be accessible to everyone, regardless of ability, age or background.  They encourage a breakdown of barriers to participation, through the flexibility of the award scheme, the fact written work is not a requirement, and they are not an academic assessed award.   The Awards have been popular with groups with additional support needs and one such group in Edinburgh recently completed a Bronze level Award, despite the complex needs of individuals.  The project focussed on the Iron Age in Scotland and was entirely sensory based, with the group exploring foods, clothing and homes in the Iron Age. The project partner was impressed with the accessibility of the Awards and has since used them with a further two groups.

The global pandemic presented a new challenge for awards groups, groups projects had to be quickly adapted to work for individuals and families working from home.  A combination of the flexibility of the Awards, the support of the Archaeology Scotland Learning team and new guidance created to support safe lockdown projects meant the Heritage Hero Awards continued to thrive during this difficult period.  Teachers have repeatedly praised how they have helped their pupils engage from home, providing structure where it might otherwise have been lacking.  Lockdown Awards have included projects with young people exploring the heritage on their doorsteps. Inspiring others with their findings using digital means. Including PowerPoints for classmates and stop motion videos.

Despite the challenges of lockdown, Covid-19 has highlighted future opportunities for digital engagement, making Awards more accessible for individuals struggling to work in groups for geographical, or other reasons.  We intend to continue supporting these projects going forward.

We’re always looking to increase our audience, and over the next few years hope to see projects across all local authorities in Scotland, and support some pilot projects elsewhere in the UK. We also hope to support more projects from groups of people who are new to heritage, creating new audiences for the sector.