The Defence Infrastructure Organisation (DIO) on behalf of the Ministry of Defence awarded their prestigious Heritage Award to the Netheravon Barrow Rescue project. The Heritage Award is one of the Sanctuary Awards, which are presented annually to recognise sustainability work on the defence estate.

The Netheravon Barrow Rescue project saved an important Early Bronze Age site on Salisbury Plain. Tom Theed of Landmarc and his team discovered an unusually large Early Bronze Age cremation urn in many pieces on a burial mound at Netheravon, ‘excavated‘ by badgers. From their discovery the rescue project was launched; controlled excavation of the find spot was subsequently undertaken by Wessex Archaeology in conjunction with the Defence Infrastructure Organisation and Operation Nightingale. Through the excavation a range of remarkable artefacts were discovered including a bronze saw, a beautiful stone archer’s wrist guard, a bronze chisel still with its antler handle and almost 1 kg of cremated human remains. 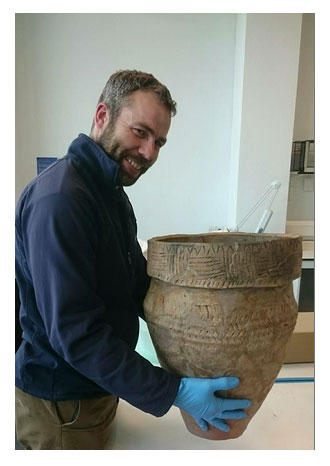 DIO senior archaeologist Richard Osgood said: “I am delighted that this award has recognised the efforts made to save a four thousand year old burial mound and some beautiful artefacts which are now on display to the public. I’m especially pleased this award also recognises the contribution made by Operation Nightingale which has made such a tangible difference to all those injured service men and women who have been involved in the project.”

Project director Richard Bennett said: “We are soldiers, sailors, airmen and women and marines and we have proved that we can turn our very unique skill sets to benefit our heritage and its preservation. Being on projects like this provides solace that there is life after the military no matter how hard the journey is along the way.”

The Early Bronze Age cremation urn was put back together by Gabby Flexer at the Wiltshire County Conservation lab in Chippenham and will eventually be displayed with other finds from the site at the Wiltshire Museum, Devizes.

It is excellent that the Netheravon Barrow Rescue project won the Heritage Award, as it highlights the superb work of all involved in the project and the importance of the site.